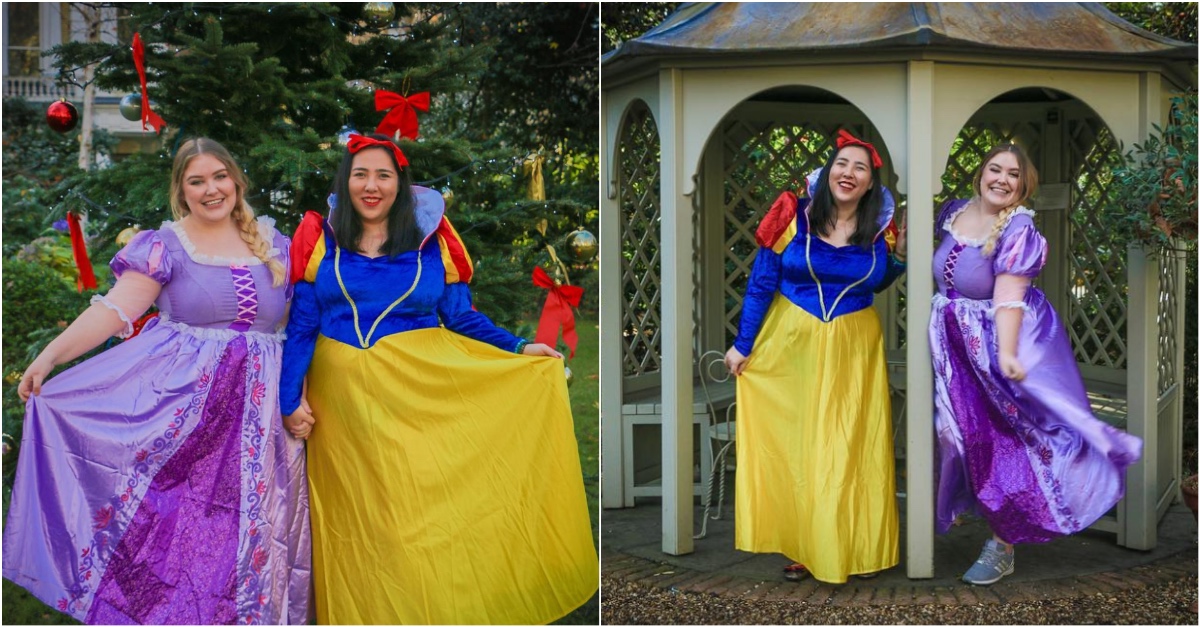 Amy happens to be a 27 year old body-positive advocate from Chelmsford, England, (aka @amyeloisew). Michelle Elman is 24 years old, and she’s a body-confidence coach from London, England, (aka @ScarredNotScared).

However, they decided to dress up as their favorite characters they always wanted to be and took it to Instagram.

As a little girl I would stare, wide-eyed at the princesses on the screen and when I first met Jasmine at Disney World I was stunned into silence because I had never seen anyone so beautiful. In my head I am, and have always been, part of the unofficial Princess Line. It didn’t escape me that all the princesses were a very small dress size and were considered absolutely beautiful. And that the fatter (and thus “uglier”) characters were the villains or the comic relief. Ursula or LeFou. Queen of Hearts or Philoctetes. In fairytales it seemed that the thin and beautiful got the happiest ending, and the fat and unconventional, for the most part, didn’t. Disney has such a special place in my heart, but it’s undeniable that it sells a very particular beauty ideal, and we place a lot of value on that ideal. Then we grow up and realise they’re just cartoons and not real people, but we’re still fed a more human (albeit unrealistic for many) version of that ideal. In all honesty, I’m tired of seeing the same bodies represented again and again. It’s time we had a fat princess. A princess with scars. A trans princess. A princess with a disability. A princess that hasn’t had her body drawn from the same stencil as all the others. And so, with that in mind, I give you @scarrednotscared and myself. A fat Rapunzel and a Snow White with scars, looking cute as heck. 👑💖 📸: @the_feeding_of_the_fox 💖💖

After giving an interview, Elman (on the left) had an idea which made her consider that how her views has turned bias against the scars she had on her head and torso after the surgeries she had to go through.  Elman had about 15 surgeries to treat a punctured digestive system, a tumor in the brain, brain cyst, bowel obstruction and there’s this condition known as Hydrocephalus. In simple words, liquid buildup inside the brain. “I don’t really define myself as healthy or unhealthy,” she says of her ongoing condition.)

While Elman was a child, she used to watch The Lion King, which is a Disney movie as many of you must know about it. The character in the movie who was known as Scar, changed Elman’s way of perceiving scars. “So many villains have scars but never the princess,” Elman says. “I wanted to show that there needs to be diversity in Disney movies.”

While being According to Elman, she agrees that the diversity of the size is important, indeed. While being temporarily fed by a tube, bedridden and not being able to exercise for up to several months after the surgeries she had to go through, has surely made it difficult for her to keep track of her weight and maintain it. “Thinness is definitely equated to beauty, so when I started gaining weight due to my surgeries, I knew that automatically exempt [me from being beautiful] — especially with my scars,” she says.

Since Disney was to be the known source of Elman’s self esteem issues, she decided to meet Wooldridge and to discuss about it. She met her about two months ago and Wooldridge was the biggest fan of Disney that she knew. After a mutual friend in the body-positivity community introduced them with each other, Elman and Amy became friends about an year ago)

Despite the fact that Wooldridge loves Disney, she speaks out about how she was affected by the movies that Disney produced when she was a child. She says, she noticed that how the thin characters always had the happy endings. “I was terrified of being fat, I thought it was the worst thing I could be,” she says.

Embracing their body as it is, has helped them a lot in accepting themselves, says Elman and Amy Wooldridge. To spread it furthermore, both the ladies decided to get together and post photos of themselves on the Instagram. While Wooldridge wore a Rapunzel’s costume, Elman decided to dress as the scarred Snow White.

They made sure to tag Disney in the pictures that they uploaded on the Instagram so that they would take note of it and diversify the cast.

WE NEED A FAT PRINCESS. Growing up with Disney, my heart hurt a little. None of them looked like me but you know what made me feel worse? Scar from the lion king. This is just the beginning of the life long stigma against scars. Think about how many villains have scars! Then I got older, and I got bigger with each surgery. At 7, my head and stomach were already covered in scars and I was already bigger than my friends. Disney princesses are seen as the epitome of beauty and even as a young girl, I quickly learnt that meant I wasn’t beautiful. This was emphasised even more when we shopped for princess birthday parties. There were never any in my size. Things haven’t really changed. It was sooo hard for @amyeloisew and I to find these in our sizes. I actually wanted to be jasmine so I could be a Scarred princess but no surprises that people still continue to assume fat women don’t wear crop tops. How incredible would it be for little kids to grow up and instead of saying “I want to look like her!”, they could say “wow she looks like me!”. How incredible would it be if the epitome of beauty and the envy of many little girls wasn’t so equated to thinness? Until @disney makes that happen, Amy and I would be honoured to fill the childhood dream you never knew you wanted of having a fat (and Scarred, although you can’t see it!) princess. #ScarredNotScared 📷: @the_feeding_of_the_fox

There isn’t response from Disney as of yet. However, even if they don’t get any response from Disney, they are still interested in seeing diversity in princesses.  A disabled princess, a princess who has scars, a transgender and last but not the least, what they classify as a “fat” princess.

Elman says, “Avoiding using the word [‘fat’], or using it in hushed tones like is so often the case, stigmatizes fat people further because it embeds shame, we both believe in normalizing the word and using it in as casual a way as tall.”

Their Instagram’s post definitely had an impact on their followers. “I hope that [Disney] considers broadening their definition of beauty,” Elman says.

Get all the health and fitness news directly in your feed. Follow Facebook.com/CosmoBod.