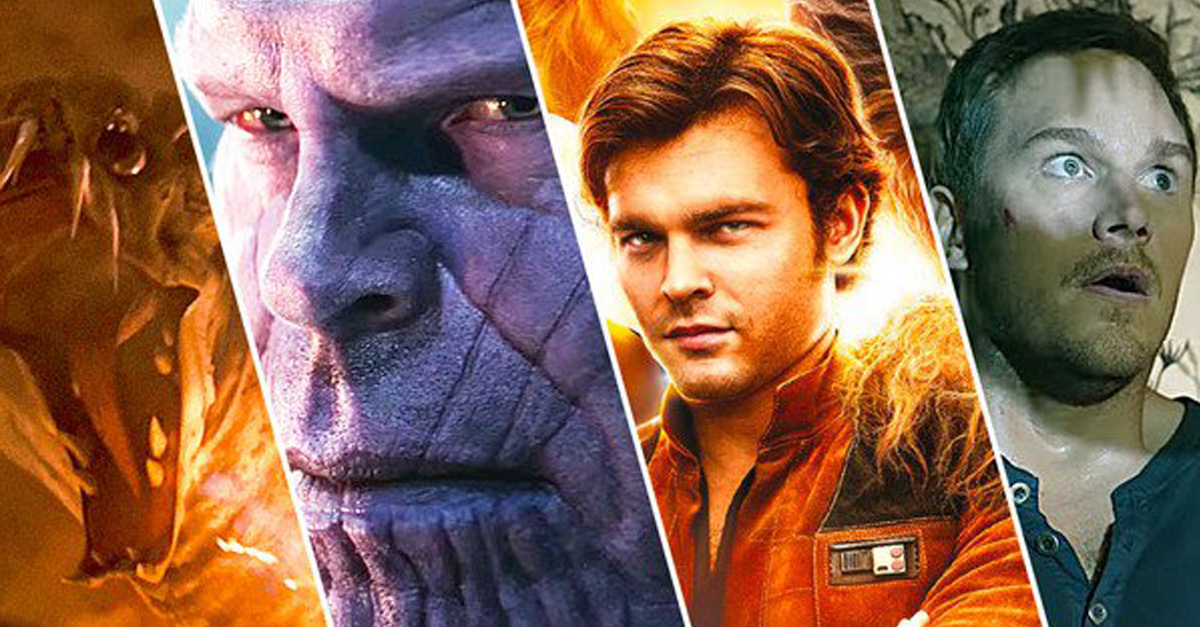 The 52nd edition of the Super Bowl saw the Philadelphia Eagles Thrash the reigning champs New England Patriots in a spectacular fashion. But like any other modern-day sporting event, the Superbowl LII too witnessed its fair share of glamour by way of the release of numerous trailers for movies that will hit the silver screens in 2018.

We have compiled a list of the best of them for your viewing pleasure.

Tom Cruise returns to the shoes of his most beloved character Ethan hunt once again as Hunt watches a horror of his own making unfold before his own eyes and now must do everything in his power to stop it. Here’s the full synopsis of the movie that releases July 27.

The legendary space-hopping pirate from a “galaxy far far away” will see his origin story being tackled for the new age. The movie was beset with production difficulties with first its directors  – Phil Lord and Christopher Miller – being fired and replaced with veteran Ron Howard and then reports surfacing that Alden Ehrenreich, the lead star, was not up to the mark as Han Solo. What went on behind-the-scenes is now of no consequence as the movie is ready for a release on May 25. Here’s the full synopsis.

“Board the Millennium Falcon and journey to a galaxy far, far away in “Solo: A Star Wars Story,” an all-new adventure with the most beloved scoundrel in the galaxy. Through a seres of daring escapades deep within a dark and dangerous criminal underworld, Han Solo meets his mighty future copilot Chewbacca and encounters the notorious gambler Lando Calrissian, in a journey that will set the course of one of the Star Wars saga’s most unlikely heroes.”

The second installment of the Jurassic World franchise returns to Isla Nublar, a place under threat of extinction owing to an impending volcanic eruption. What follows is a deadly game of cat and mouse as returning characters from the first movie work against the clock to prevent the extinction of dinosaurs present there. Here’s the new synopsis for the movie that releases June 7.

“It’s been four years since theme park and luxury resort Jurassic World was destroyed by dinosaurs out of containment.  Isla Nublar now sits abandoned by humans while the surviving dinosaurs fend for themselves in the jungles.

When the island’s dormant volcano begins roaring to life, Owen (Chris Pratt) and Claire (Bryce Dallas Howard) mount a campaign to rescue the remaining dinosaurs from this extinction-level event.  Owen is driven to find Blue, his lead raptor who’s still missing in the wild, and Claire has grown a respect for these creatures she now makes her mission.  Arriving on the unstable island as lava begins raining down, their expedition uncovers a conspiracy that could return our entire planet to a perilous order not seen since prehistoric times.

With all of the wonder, adventure and thrills synonymous with one of the most popular and successful series in cinema history, this all-new motion-picture event sees the return of favorite characters and dinosaurs—along with new breeds more awe-inspiring and terrifying than ever before.  Welcome to Jurassic World: Fallen Kingdom.”

The third installment in the super-secret Cloverfield Universe just hit Netflix but the trailer for the same was released for Super Bowl. The movie follows a team of astronauts who make a horrifying discovery from space. The movie is playing now on Netflix. Here’s its synopsis:

“In the near future, a group of international astronauts on a space station are working to solve a massive energy crisis on Earth. The experimental technology aboard the station has an unexpected result, leaving the team isolated and fighting for their survival.”

The conclusion of the Marvel Cinematic Universe as we know it by now comes in the form of the first movie of a two-part finisher. Avengers: Infinity War will release on April 25 and will see super-villain Thanos finally unveil his evil on earth in search of the infinity gems. Here’s the full synopsis.

“An unprecedented cinematic journey ten years in the making and spanning the entire Marvel Cinematic Universe, Marvel Studios’ “Avengers: Infinity War” brings to the screen the ultimate, deadliest showdown of all time. The Avengers and their Super Hero allies must be willing to sacrifice all in an attempt to defeat the powerful Thanos before his blitz of devastation and ruin puts an end to the universe.”

Global action star Dwayne “The Rock” Johnson returns after the super success of his last, Jumanji: Welcome to the Jungle in order to tackle a Die Hard-esque thriller set in a building – in this case the tallest cinematic building in the world. Here’s the synopsis of the movie that releases July 13.

“Global icon Dwayne Johnson leads the cast of Legendary’s Skyscraper as former FBI Hostage Rescue Team leader and U.S. war veteran Will Ford, who now assesses security for skyscrapers.  On assignment in China he finds the tallest, safest building in the world suddenly ablaze, and he’s been framed for it.  A wanted man on the run, Will must find those responsible, clear his name and somehow rescue his family who is trapped inside the building…above the fire line.”

Academy Award-winning Jennifer Lawrence looks to be tackling her first full-fledged action role with Red Sparrow, that releases March 1. She plays a Soviet spy in this espionage thriller that also has Joel Edgerton playing a CIA agent. Here’s the full synopsis.

“Dominika Egorova is many things. A devoted daughter determined to protect her mother at all costs. A prima ballerina whose ferocity has pushed her body and mind to the absolute limit. A master of seductive and manipulative combat. When she suffers a career-ending injury, Dominika and her mother are facing a bleak and uncertain future. That is why she finds herself manipulated into becoming the newest recruit for Sparrow School, a secret intelligence service that trains exceptional young people like her to use their bodies and minds as weapons. After enduring the perverse and sadistic training process, she emerges as the most dangerous Sparrow the program has ever produced. Dominika must now reconcile the person she was with the power she now commands, with her own life and everyone she cares about at risk, including an American CIA agent who tries to convince her he is the only person she can trust.”

So, which are the ones you like the most?