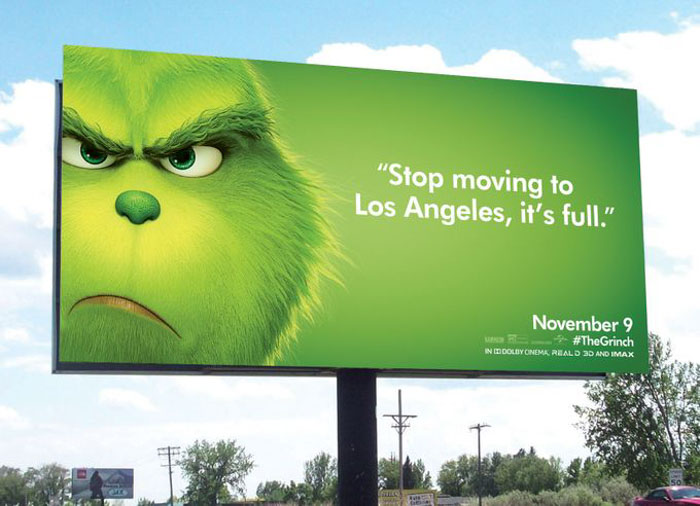 Sometimes, all you want to do is tear down that wall of composure and burn it into flames!

That’s what people do to you. They just know how to get on your nerves because they have nothing better to do. They make you want to do the evilest of things and react in ways you have never reacted before.

In easier words, you want to be more like the Grinch! Which reminds me, have you guys checked out the new Grinch movie? If not, then its out and running since November 10th. And it was a huge success!

Moreover, if they owe this success to anybody, then it’s those nefarious billboards they put up all over the city. So I suggest, you should also get into the Christmas spirit and hit the cinemas right away!

Check out some of the black-hearted billboards below:

“I put gluten in your smoothie.”

“I hope I’m ruining your photos.”

“Keep honking. it will make everything go faster.”

“Your date is just here for the popcorn.”

“Oh, you’re just trying to make it in Hollywood? Let me know how that goes.”

“I love it when this light turns green and nobody moves.”

“I could watch you crawl down the LIE all day.”

“Good luck getting those Hamilton tickets.”

“I’m sure you’ll catch the next one.”

“Seriously, another day of sunshine?”

“Hope you don’t miss that audition.”

“No, I don’t want to go to your off-Broadway play.”

“Hope you weren’t planning on retiring any time soon.”

“Of course you’ll make it as an actor.”

“New Yorkers totally get me.”

“I was told this billboard would be San-Francisco adjacent.”

“You’re the second city? Must stink not to be the first.”

“Rent is so cheap here.”

“I love watching tourists try to hail a cab.”

“Maybe today you’ll find a shortcut to the 10.”

Let us know what you think of this in the comments below!