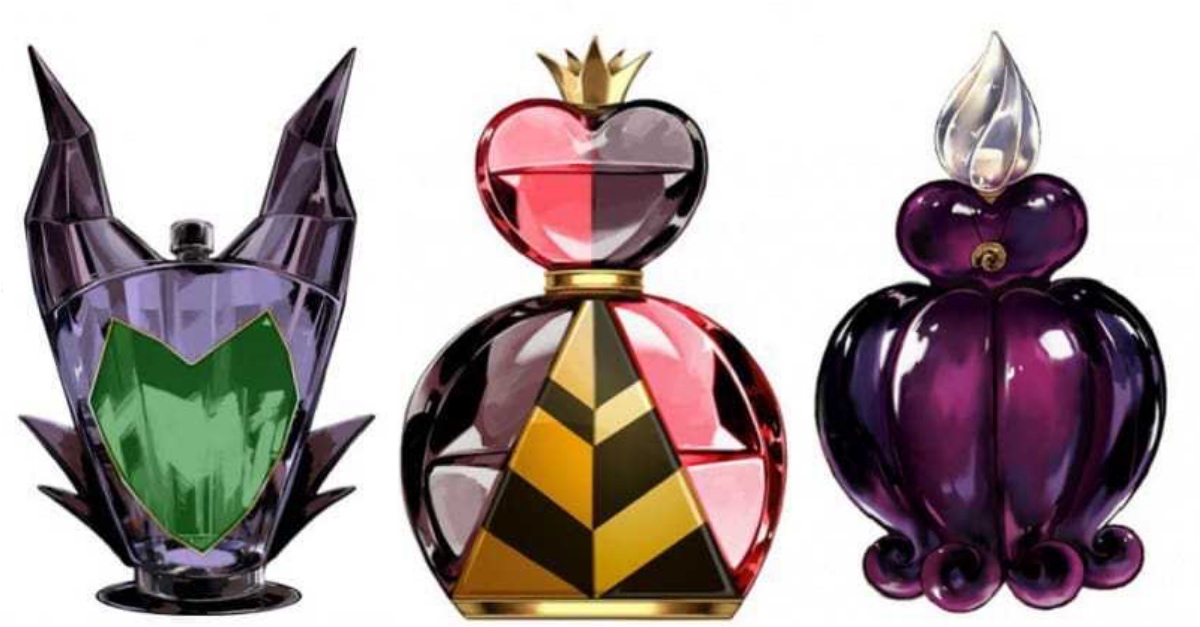 The voluminous amount of Disney fanart demands that a project be truly unique to stand out from the pack. These clever Disney villain perfume bottle illustrations fit the bill perfectly.

1. The Evil Queen (Snow White and the Seven Dwarfs) 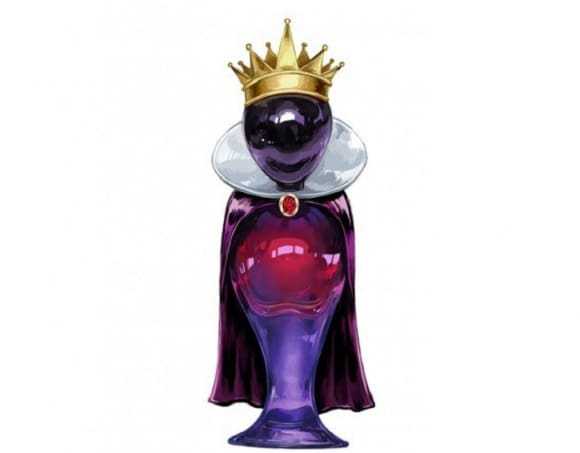 This one is pretty obvious. The colors suggest that it could be part of the Evil Queen’s poison collection. We like to think that the red in the center suggests an apple, and we’ll be darned if we don’t see a cloaked figure in a forest and rising moon in the shadowing on the “head.” 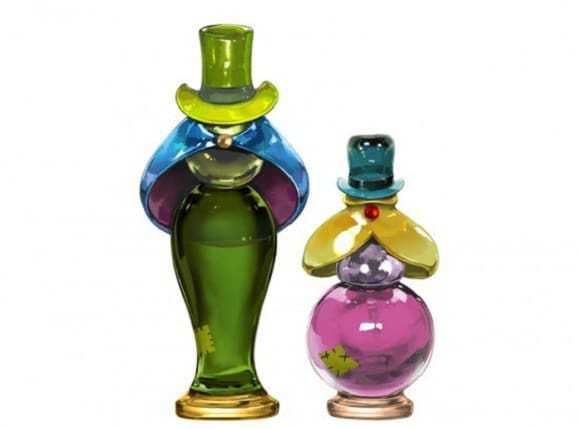 This one took us a minute or two to recognize as the fiends who lead our favorite marionette to the dreadful Pleasure Island, because it’s been years since Pinocchio. The patches are cute touches, but the one on the right reminds us of the walrus from Alice in Wonderland. 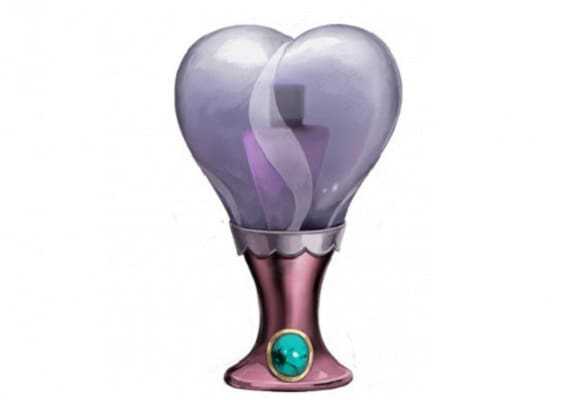 We love the turquoise “brooch” at the base of the bottle. The shape manages to capture the original evil stepmom’s stiff, judgmental posture.

4. The Queen of Hearts (Alice in Wonderland) 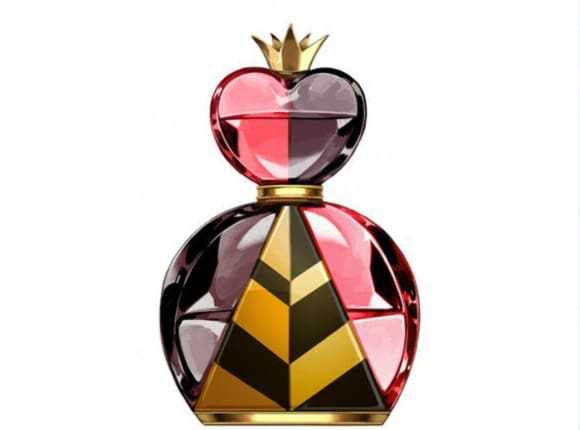 The shape of the bottle is a dead ringer for this queen’s stout figure, and the heart-shaped stopper is a nice touch (and don’t think we didn’t notice that it doesn’t have a “head”). 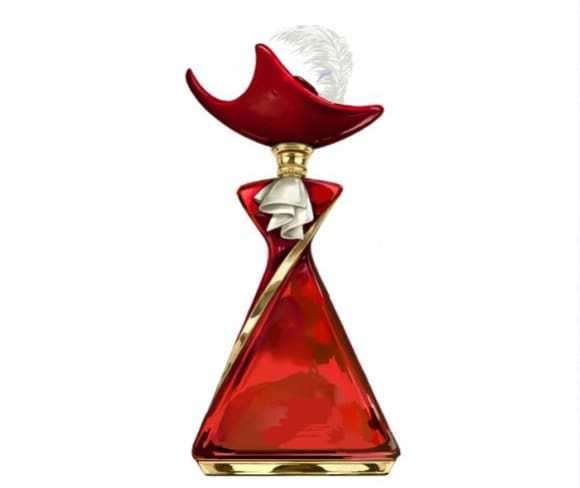 This might be our favorite in the collection (that feather!). The twist in the design suggest movement–a pirate captain preparing to draw his sword, perhaps? 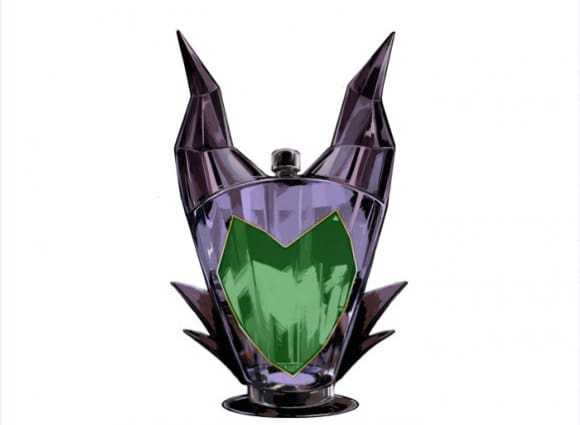 Think what you will, Maleficent is probably the most iconic of all in Disney’s rogues’ gallery, and it has a lot to do with those horns. We might be seeing things, but do you see an abstract sleeping figure reflected in the green “face”?

7. Cruella de Ville (One Hundred and One Dalmatians) 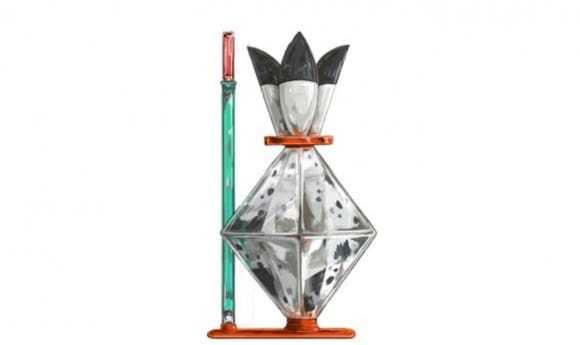 We love how the stopper comes directly from Cruella’s fur coat, and the bottle has a very subtle spotted pattern to it. We wonder what the cigarette holder could be used for. As an applicator, perhaps? 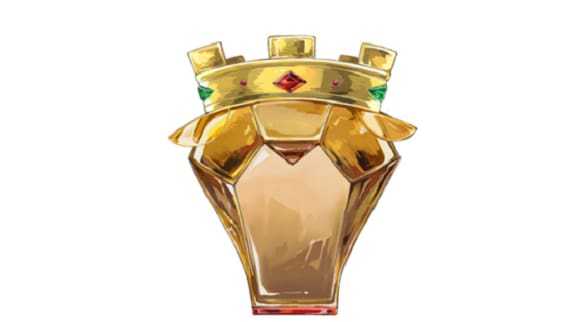 The ears are too cute! This would probably make a great cologne bottle, even without any Disney connections. Give it a horribly cheesy name like “King’s Musk.” 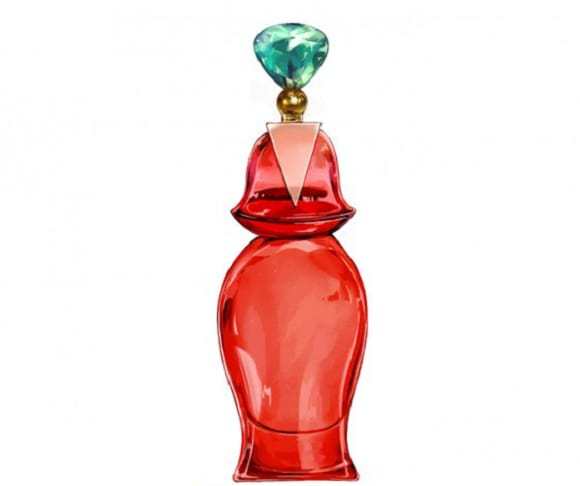 Honestly, Madame Medusa freaked the hell out of us. As for this bottle, the top emulates both the diamond that she obsesses over, and her rather large teal earrings. 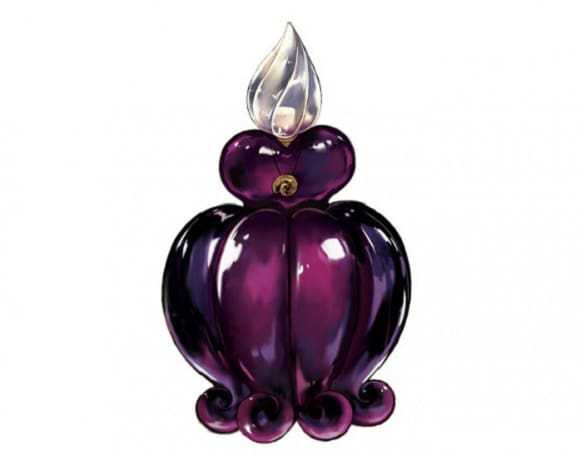 This perfectly exudes the voluptuous curves of everyone’s favorite octopus lady. The stopper looks like a little swirl of ice cream, though. 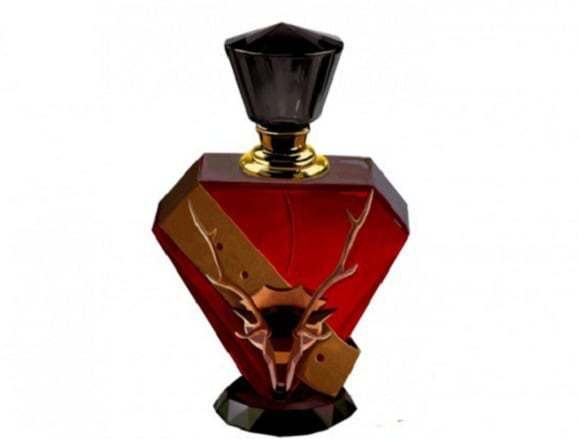 Well, this one is even more masculine than Prince John’s. Even the sight of it smells like whiskey and leather. We love how the inverse triangular shape mimics Gaston’s dreamy physique (and there’s even a little line for his pecs). 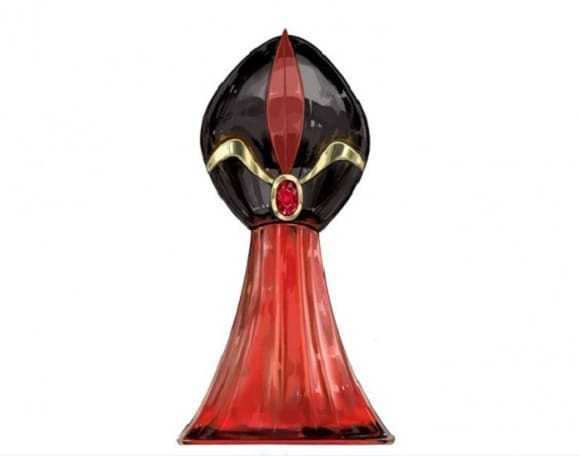 One of the only things that ever bothered us about Aladdin was how long Jafar’s neck is. Is it supposed to hint at his snake-like nature? Anyway, we love how this bottle also suggests the shape of Agrabah’s palace towers. 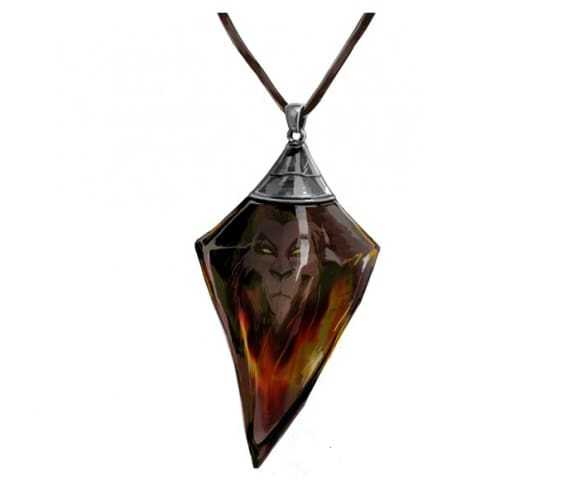 We’ve always liked little bottles as pendants, but this one seems a little un-inventive. Sure, the reflection of flames is a nice touch (if a bit morbid), but we think there could have been more subtle ways of incorporating Scar’s face but notice how the light runs over his right eye just like his scar-that’s cool! 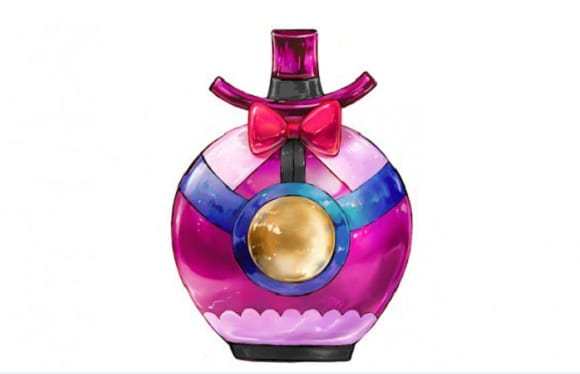 Certainly captures Ratcliffe’s exaggerated rotund shape (and his confounding medallion), but we can’t quite imagine what scent would end up in this bottle. 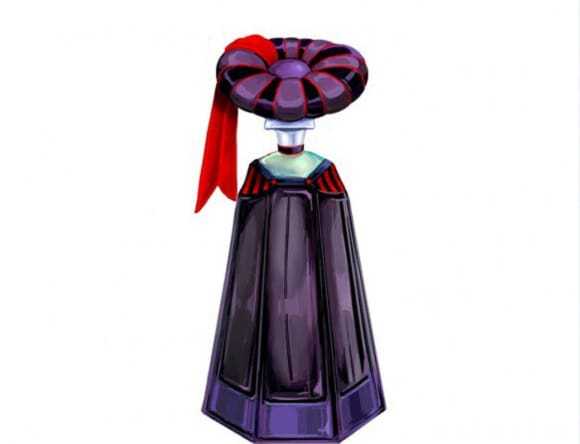 It’s almost like Frollo’s headgear was intended to be perfume bottle stopper. Betcha this one would be called “Lust”…or “Hellfire.” 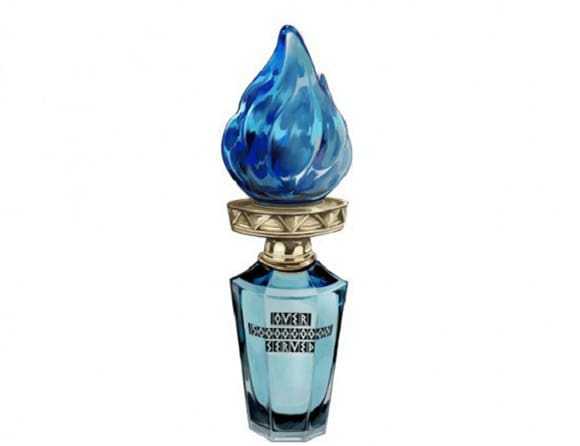 There are just so many great details about this one, we can’t even start describing them. First off, the body itself is shaped like the bottle used to poison poor baby Herc in the movie. And then there’s the Underworld’s cheeky slogan, and Hades’ flaming hair! Wonderful! 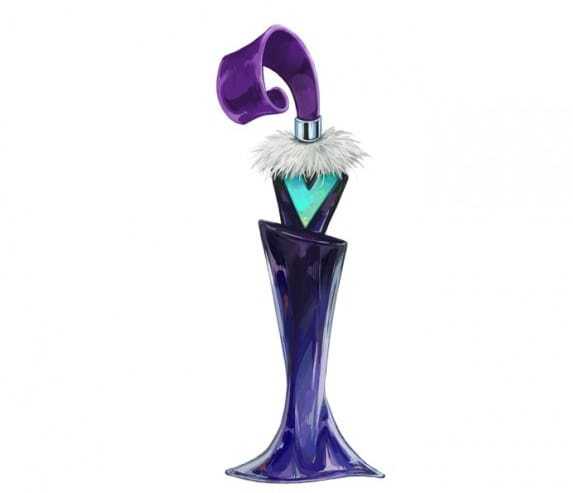 We didn’t know if bottles could have sass, but this one definitely does. Like the Captain Hook bottle, this one manages to convey a sense of motion. Also, we’re loving the opalescent chevron below the fur.

18. Dr. Facilier (The Princess and The Frog) 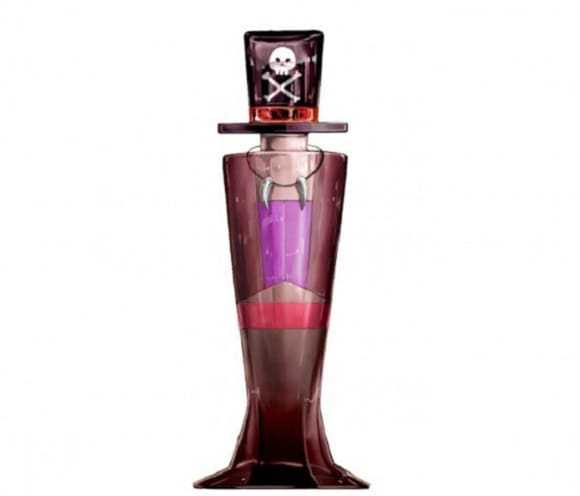 We honestly think this one could have been better if it just stuck with the hat. Yes, the rest of it does match his costume, but it feels a little uninspired. 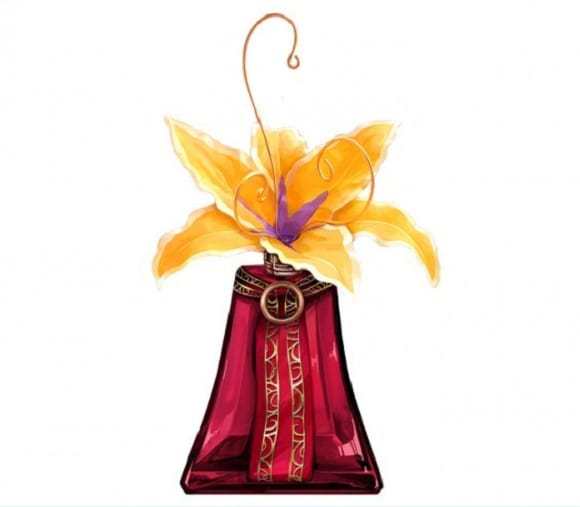 Last, but not least: how could you not want this one sitting on your vanity? The contrast between maroon and gold is striking, and that flower, of course, is just stunning.

Unfortunately, these bottles don’t exist in real three-dimensional life just yet, but if they ever do, I’m sure they’ll fly off the shelves (not literally, hopefully–that would be a mess).

What do you think? Want them?