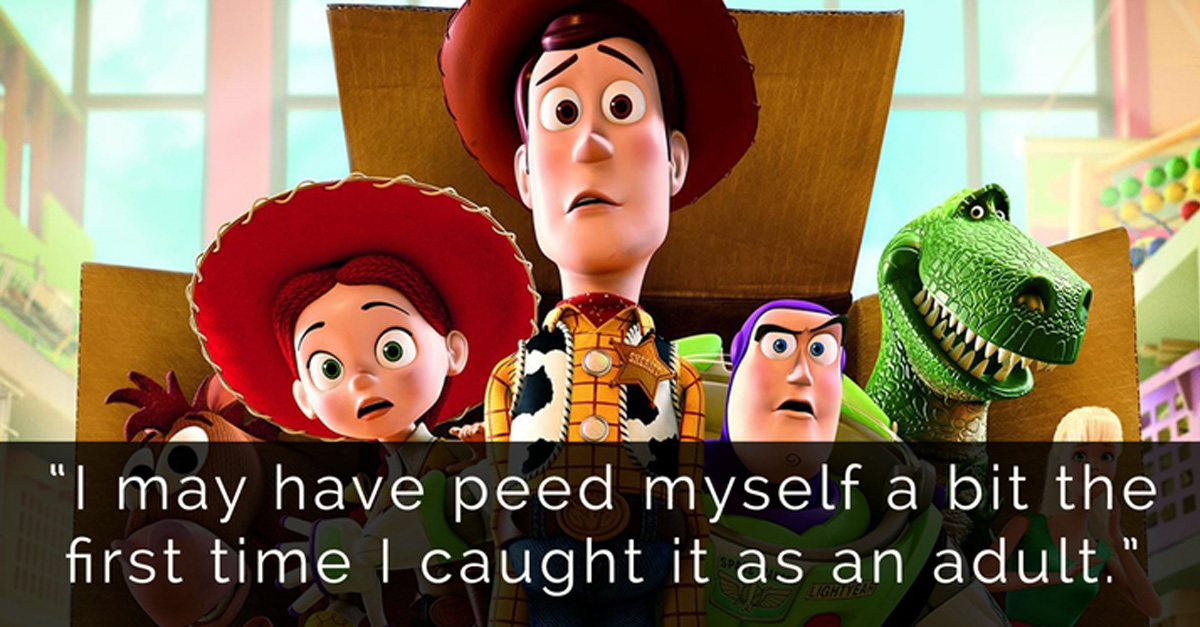 Kids movies are not as innocent as you think.

No, It is certainly not a bad thing. I mean do you even remember how many times we have watched one particular movie and our parents had to sit through them all?

Well, don’t feel too bad though. As these movies did have a few jokes to give them some kind of relief. What kind of jokes you ask? Adult jokes of course! So today we are here to remind you of all of them courtesy of a reddit user paesoo.

“What is the funniest “adult innuendo” from a childhood movie you didn’t catch as a kid?” He asked. And people delivered!

In Space Jam Bugs Bunny acts like a wooden board after Lola flirts with him. Did not understand that until much later.

In Robots, the father is running down the street yelling “I’m gonna be a dad!!!” because his son is about to be born.

When he gets home, a delivery truck is just leaving, and his wife says “oh, honey, I’m sorry, you missed the delivery…. but that’s ok, making the baby is the fun part” and holds up the box they are given with the parts to build their child with.

In Goonies, when they’re trying to glue the statue’s dick back on, Mikey says “Guys, that’s my mom’s favorite piece. Mouth says “You wouldn’t be here if it wasn’t”

The first time it clicked for me, I nearly pissed myself.

The intro to road to Eldorado, when the two Armadillo jump behind a bush and the Bush shakes violently for 5 seconds, then an entire family of Armadillo jump out.

In Aladdin and the King of Thieves, when the thieves raid the wedding. The ground is shaking because of a stampede and the genie says, “I thought the ground wasn’t supposed to shake until the honeymoon.”

From Ratatouille, Linguini is trying to confess the real reason everyone thinks he can cook:

Linguini: [hesitantly] I have a secret. It’s sort of disturbing. I have a ra… I have a raaaaa…

Colette: You have a… rash?

Linguini: No no no. I have this-this tiny, uh, little… little…

I only recently realized that Sugar Honey Iced Tea in Madagascar stands for Shit.

Rocko’s Modern Life. The had a restaurant called the Chokey Chicken, a game called Spank the Monkey, and at one point Rocko worked as a sex line operator.

Mrs. Bighead calls in and he is saying “Oh baby, oh baby”, with a sign behind him that says “Remember – Be Hot, Be Naughty, Be Courteous”.

They weren’t even trying to hide it, and it still took me 15 years later to realize.

#9 “Wallace and Gromit” from Rawshark96:

In Wallace and grommit Wallace is stripped of his clothes and his manhood is only covered by a box. The box has “may contain nuts” printed on the side.

#10 “How the Grinch Stole Christmas” from huesofelktongue:

In the grinch there’s a scene where they explain that “who babies’ are delivered to their parents from the sky in baskets with umbrellas.

One of the baskets lands in front of a house and the dad finds it and yells something like “honey, our baby’s here!” And then he takes a puzzled look at the baby and says “looks just like your boss”.

“Hey, that may take me a couple of tries, but I don’t think it’ll be a problem.”

Space Jam, when the therapist ask Ewing if there’s anywhere else he has trouble “performing”, and getting an emphatic “NO!” from Patrick.

Took me a couple years before it dawned on me.

I’m going to have to go with Toy Story Laser Envy I may have peed myself a bit the first time I caught it as an adult.

Also during the “staff meeting” there’s a part where Slinky is defending Woody, so Mr. Potato Head takes off his mouth and repeatedly hits it against his butt as a way of saying “kiss-ass”.

Not super dirty but I didn’t notice it until I was way older.

The entirety of Rango. Like the scene where he has to explain how Rattlesnake Jake is his half-brother, he says his mom had an interesting dating life.

Shrek: Do you think he might be compensating for something?

Later in the movie

Fiona: You know what? Stop it. Stop it both of you. You know you’re just jealous that you’ll never measure up to a great ruler like Lord Farquad.

Shrek: Well, Princess, maybe you’re right. But I’ll let you do the measuring when you see him tomorrow. Or honestly anything from this movie.

The scene in the original Ghostbusters when a ghost unzips Dan Akroyd’s pants in the bedroom and a little…something, something…is implied.

Never got it. Watched the movie as an adult before the remake was released and freaked out that I had watched that as a kid!

Guess its more of a general “adult” joke, but the name farquad in shrek was written meaning fuckwad in reference to Michael Eisner or something. It made the movie so much funnier.