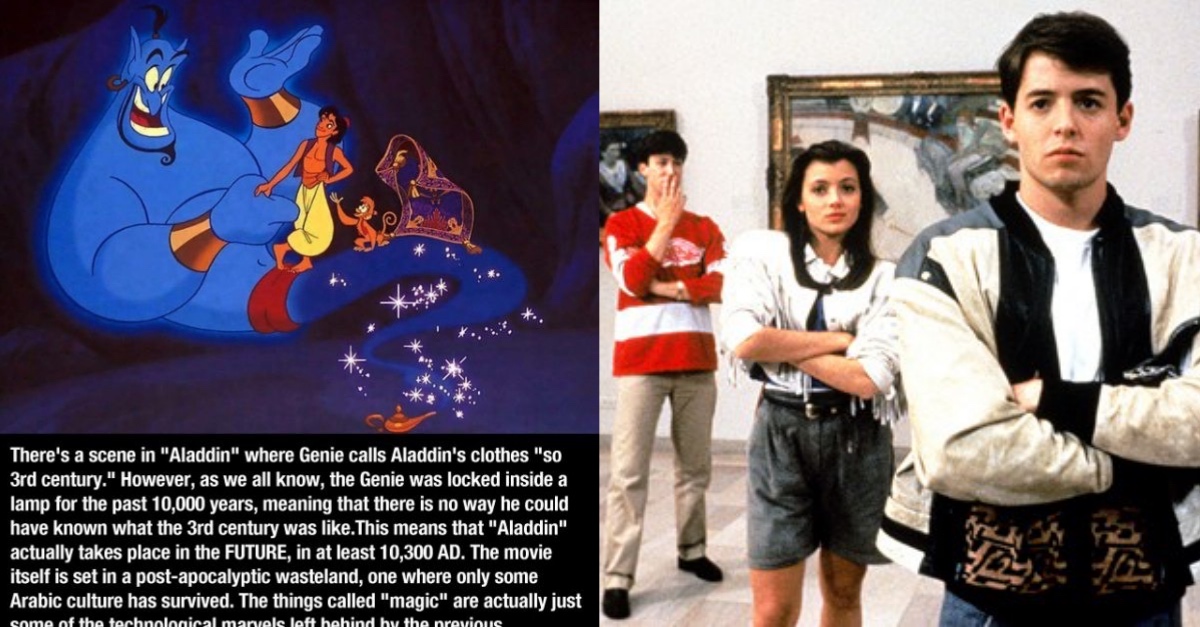 People Come Up With Insane Fan Theories About Their Favorite Movies And TV Shows.

However, no matter how insane the following theories may be. They do make a lot of sense. (Yes some of these are quite grim.) So clasp on your seatbelt as this is going to be a bumpy ride. 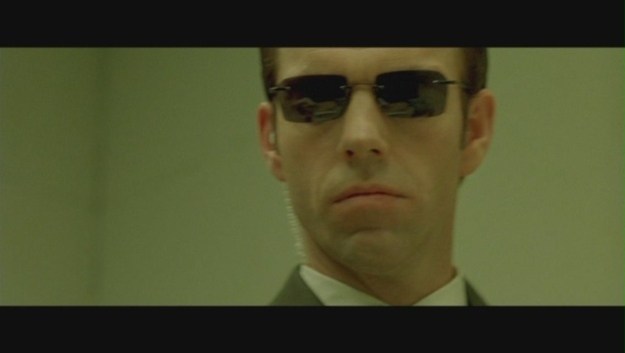 >Zion is destroyed six times.
>Six agents shown throughout the series.
>Smith, “I hate this place”
>Smith able to break the rules of the matrix like Neo
>Each matrix program produced “the one” who would try to resist and break the system down.
>The matrix converted these special people into agents.
>Smith was the first “one” and went insane during six matrixes making him lash out against the machines and try to kill Morpheous. He was also the most emotional out of all the machines who were usually emotionless.
>He was able to come into the real world through a phone, something that should be impossible because as a machine he isn’t connected to a real body.
>As a human made to believe he was a robot, he recognized Neo and worked with him to end the matrix.

#2 ‘Toy Story’ And ‘The Walking Dead’ Are Essentially The Same.

#3 All Of Tim Burton Movies Are The Same. (Is Anyone Surprised?) 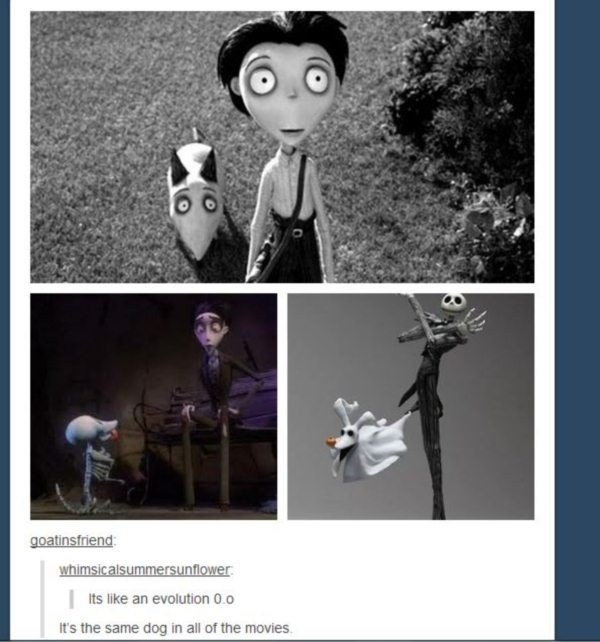 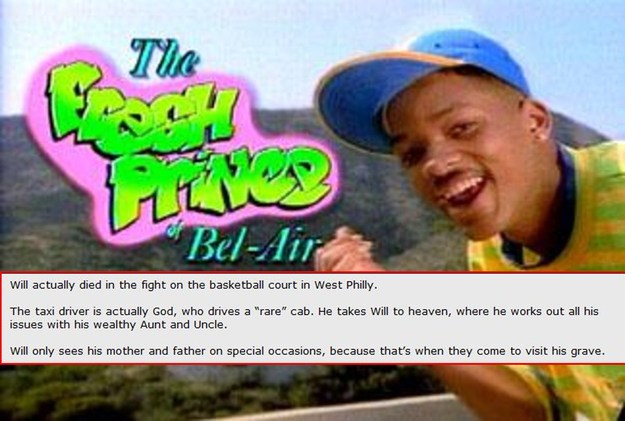 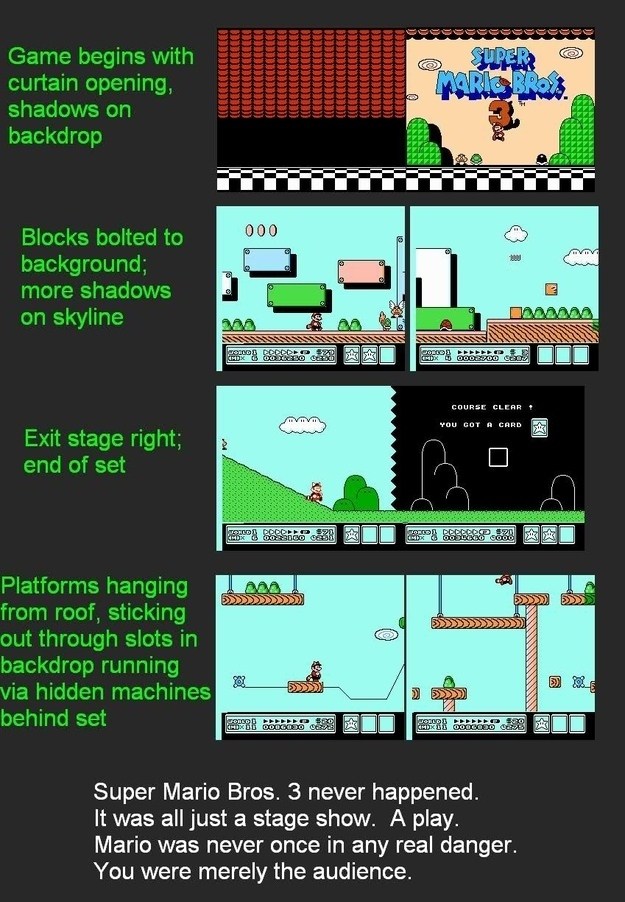 #6 Spongebob Creators Are All Mutants. 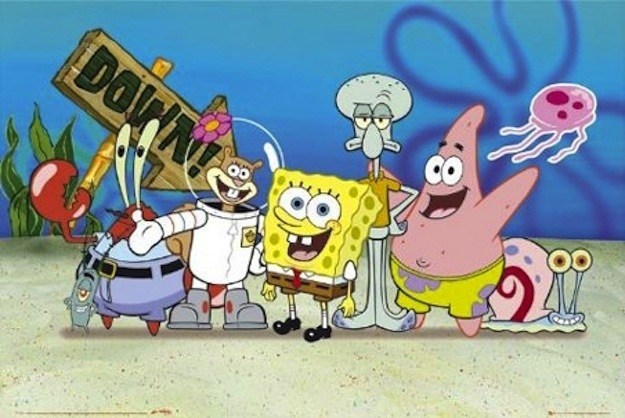 Spongebob and all his friends are the product radiation from atomic testing during the ’40s and ’50s on the Bikini Atoll. They live underneath the area, explaining the name ‘Bikini Bottom’. 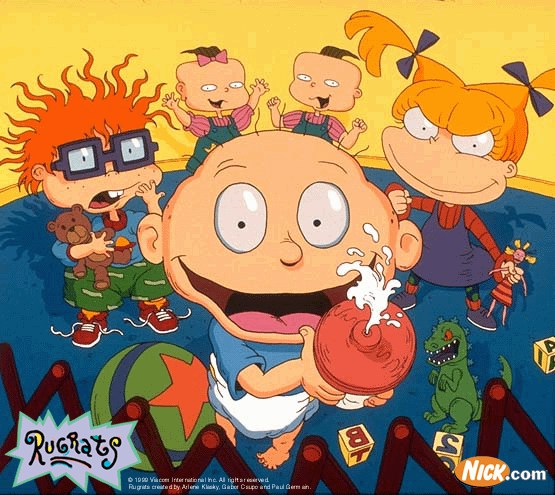 None of the babies in “Rugrats” actually exist, but they are all instead figments of Angelica’s imagination, as result of her parent’s negligence.

Chuckie died with his mother, which explains how much of a nervous wreck his father is.

Tommy was a stillborn baby, which explains why his father, Stu, was always in the basement making toys for the son he never had.

Finally, the DeVilles had an abortion. To compensate for not knowing the sex of the baby, Angelica invented twins in her head, one boy, one girl. 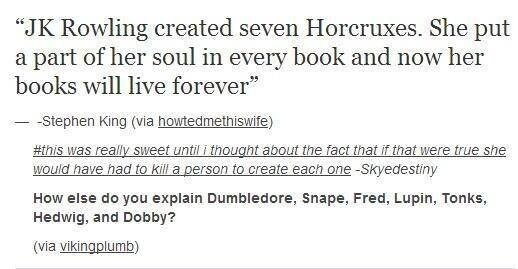 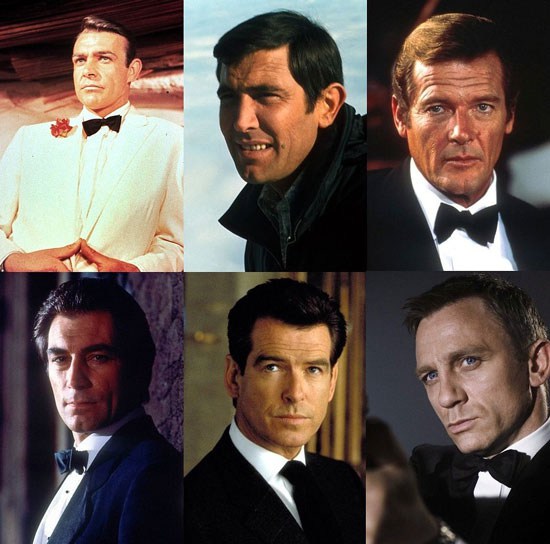 #11 The Ending To Inception Is Finally Realized. 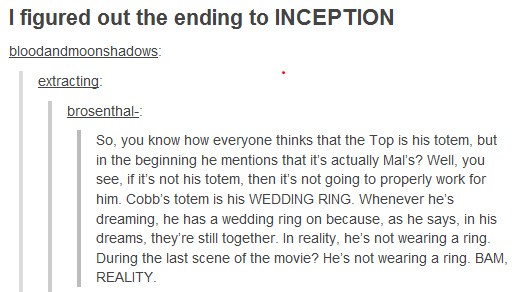 #12 It Is All Just Her Imagination. 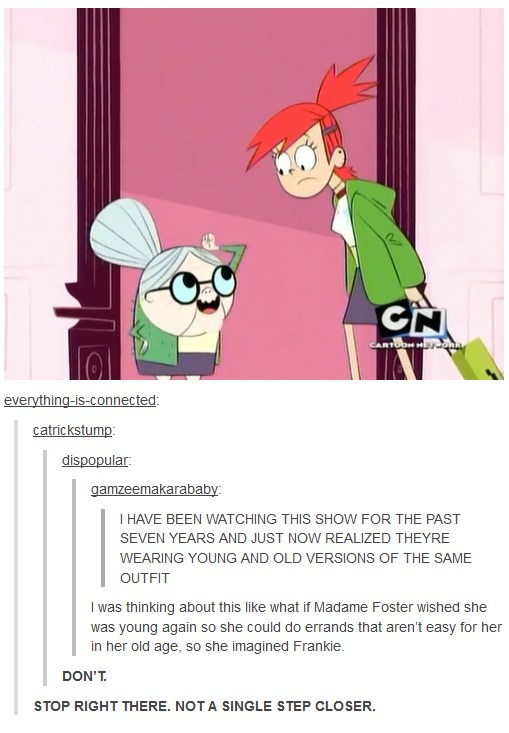 #13 ‘The Lion King’ And ‘Hercules’ Take Place In The Same Universe.

#14 Snape First Words To Harry Potter Actually Mean Something Else. 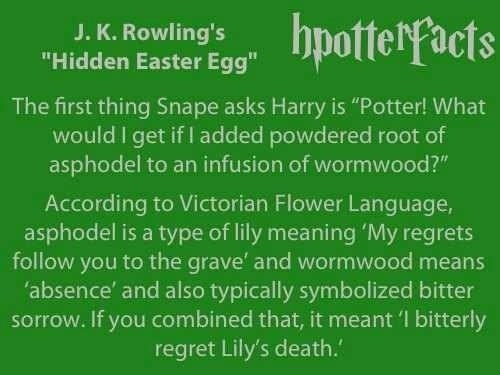 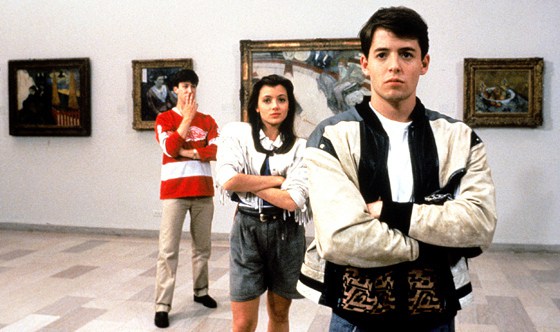 One day while he’s lying sick in bed, Cameron lets “Ferris” steal his father’s car and take the day off, and as Cameron wanders around the city, all of his interactions with Ferris and Sloane, and all the impossible hijinks, are all just played out in his head. This is part of the reason why the “three” characters can see so much of Chicago in less than one day — Cameron is alone, just imagining it all.

Ferris Bueller, the person, is just a figment of Cameron’s imagination, like Tyler Durden, and Sloane is the girl Cameron secretly loves.

#16 Turns Out Doc is Suicidal. 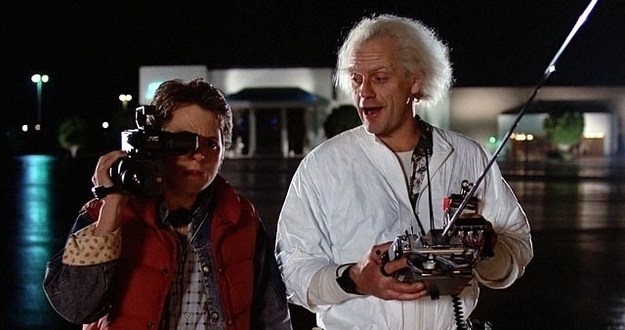 Doc is suicidal during the scene where they test the time machine. Not only has he never tested the machine, but he says that most of his inventions have been failures.

Because of this he not only drives the Delorian towards himself, but grabs onto Marty so he cannot run away.
If his invention failed, they would have both died. Which is exactly what Doc wanted

#17 Courage The Dog Is Just A Normal Dog. 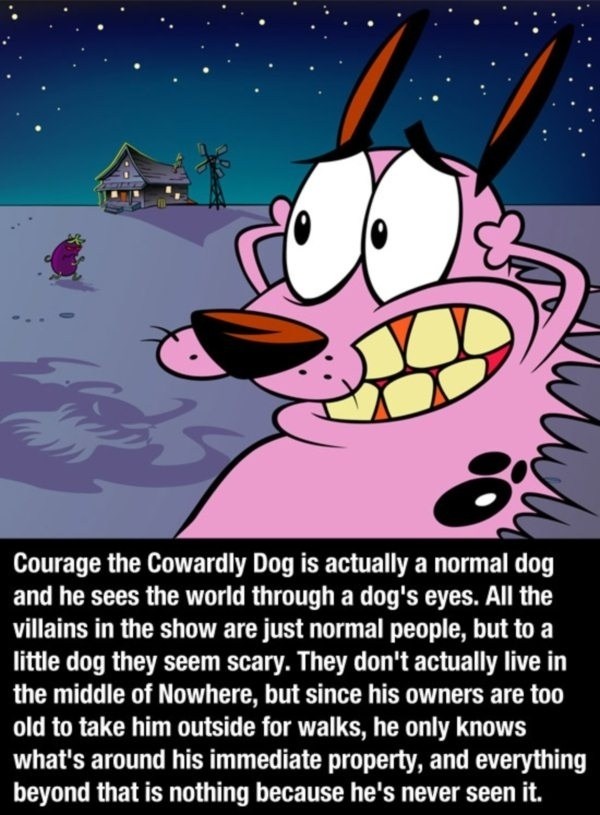 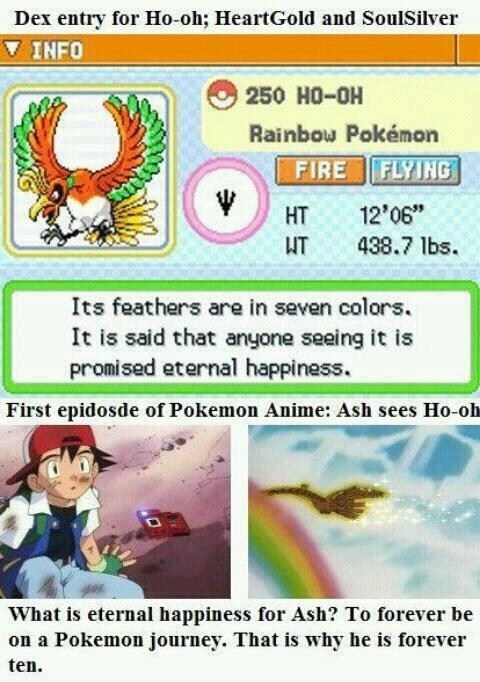 #19 Aladdin Is Actually Set In The Future. 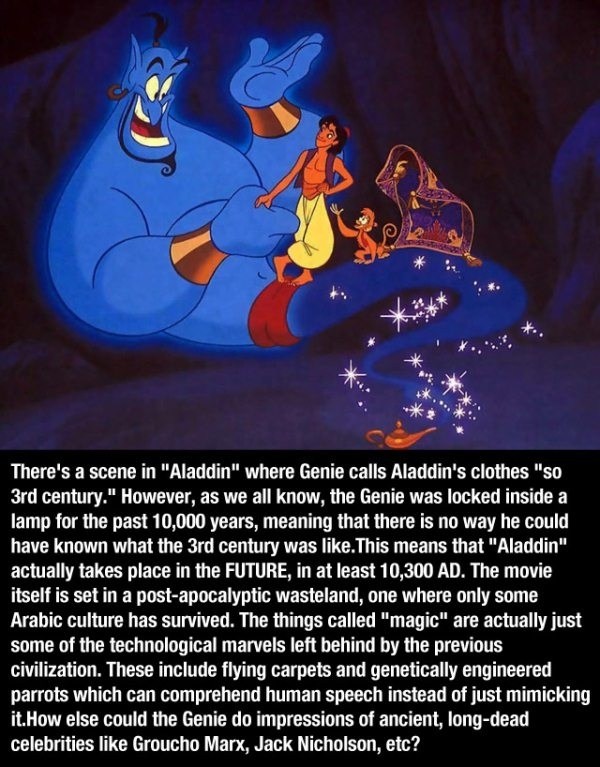