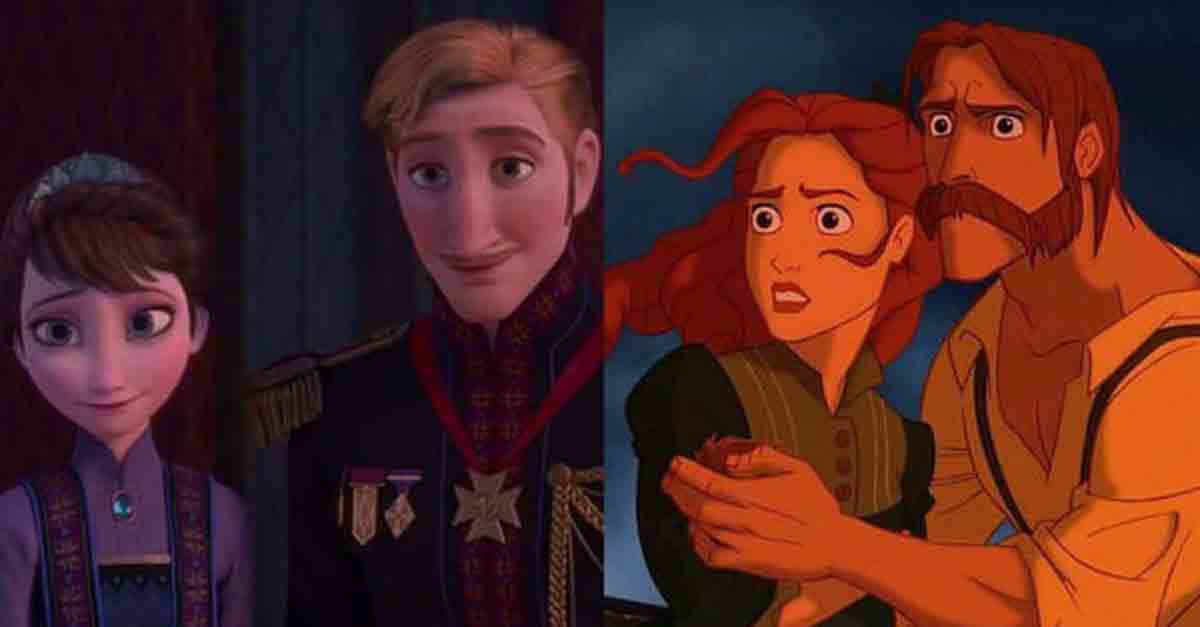 Be ready as this is gonna start getting crazy.

I am sure you have seen many little cameos of our favorite Disney characters in movies they shouldn’t be. While it could be just some sneaky little Easter eggs. We however don’t think so. That is why today I have a very elaborate theory for you.

Grab your popcorn and settle in as this is gonna start to sound a little bit crazy but stick with me okay!?

There is obviously going to spoilers for Frozen, Tangled, The Little Mermaid, Tarzan and Beauty and the Beast.

Frozen is beautiful and heart breaking tale about two sisters who each overcome their own obstacles and finally learn to trust each other. We do however get a heartbreaking start where we are shown the ship disappearing in the stormy night on which Anna and Elsa’s parents resided.

The only question that remains is as to where were they even going? Well, Many people have theorized that they were going to the wedding of Rapunzel and Flynn as we do seen them at the end of Frozen when the sisters open the castle doors.

Then there is the fact that Frozen is set in Norway evident by its Ice and Tangled is set in Germany. It would make sense for Anna and Elsa’s parents to travel by boat from one country to another.

I mean doesn’t Denmark come in between? Isn’t that the place where The Little Mermaid, Ariel lives? So what if the ship Ariel loves to swim around in is actually the same ship that was spotted in Frozen?

Yes, I am aware that the ships do not look alike but it is sunken and destroyed so who’s to say it is not the same ship?

So we have hopefully tied three movies together by now, rozen, Tangled and The Little Mermaid but it is nowhere near over yet.

Then comes the blonde hair theory.

Okay, So Rapunzel and Elsa are the only protagonists who have magic and No, talking with animals does not count. I mean Elsa has the power of Ice which is a bit confusing since she does make her dress with her powers. Anyway we are not here to debate her powers.

While Rapunzel has the power to reverse time itself bestowed upon her by the immortal flower which Mother Gothel was not too happy about. When she realized that Rapunzel’s hair loses magic when cut, she did the next best thing. She kidnapped the poor child.

Now lets get back to the theory. As you may have already guessed by its name. They both have blonde hair. Now, Whats that got to do with anything? Well what if they are related and belong to the same family?

What is Rapunzel mother is the sister of Elsa’s father? This theory matter since it confirms as to why Anna and Elsa’s parents would be attending Rapunzel wedding.

This theory also explains as to why Elsa’s parents told her to conceal her magic since they might have heard about Rapunzel getting kidnapped and wanted to keep their daughter safe and sound.

Now let’s take a ride to the jungle.

This theory is actually thanks to the directors of Frozen.

Buck did however suggest that the king and queen are actually parents of Tarzan. So yes, Tarzan might Anna and Elsa’s little brother. I am aware that this link is a bit weaker than the others.

I mean the route from Norway to Germany doesn’t really include a tropical Island. But maybe I missed something on the map.

Okay so this is a simple one. Now you may have already noticed the familiar looking tea set that the little gorilla Trek is playing with. How can that be Mrs. Potts? Didn’t she already turn human?

Well she did but what if the enchantress had put them under a spell that turned them into existing things so when they turned back the things would remain?

The big question is how did a tea set end up in the jungle? Well let me explain it to you. Jane is Belle’s great great great grand-daughter. Yes, we have more proof that just a simple tea set.

Don’t they look exactly alike? Even their fashion sense?

Both of them are into wild men.

Last but not least, they both have crazy dads.

So lets put it all together shall we?

So why would a French prince and princess have British descendants? Well Jane and Professor are probably living a century later so there is chuck of family tree that is missing.

Wouldn’t Belle and the Beast had gotten out of France when The French Revolution happened? And settled in I don’t know Germany? Now lets get back to Frozen. Remember Duke of Weselton? I mean he looks quite similar to Porter. He could be the Beasts grandson and porters grandfather .

And what if he was just scared of Elsa since his Grandfather was cursed by a blonde enchantress. I mean he doesn’t know not every magical person is not evil or just has weird priorities.

So yup that is about it. To summarize all that.

The king of Arendelle is Rapunzel’s uncle, and he and his wife were at lost at sea on their way to Rapunzel and Flynn Rider’s wedding. While their ship ended up at the bottom of the sea, where it was discovered by Ariel, they washed up on the shore of on an island where the queen gave birth to Tarzan.

Belle’s and the Duke of Weselton’s descendent, which means that Anna and Elsa’s brother married into the Weselton family.

Is anyone else’s head spinning?

So what do you think of this theory? Do you think it is a jumbled up mess? Or does it actually makes a teeny tiny sense? Share your thoughts in the comments section below.