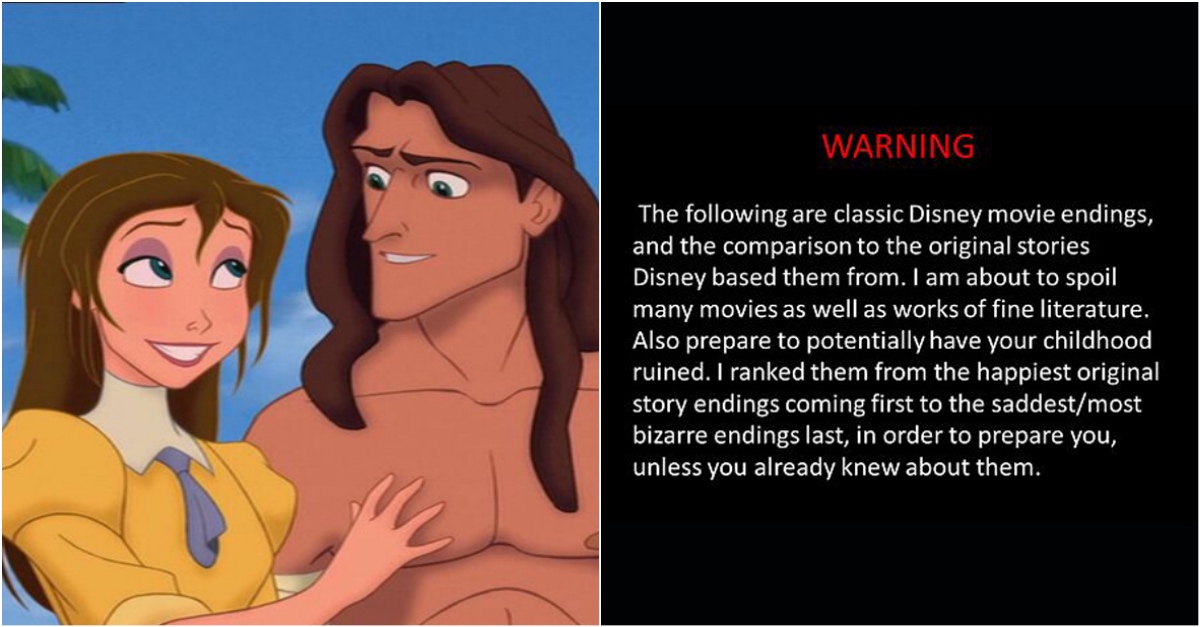 Ready to ruin your childhood?

Because ready or not, that is going to happen today. While, I’m sure you are already aware of the tiny fact that Disney movies are just re-imagined to be family friendly. We all know the stories they are based upon are quite horrific.

Yes, today we are going to explore the original tales. So scroll on below and take a look. 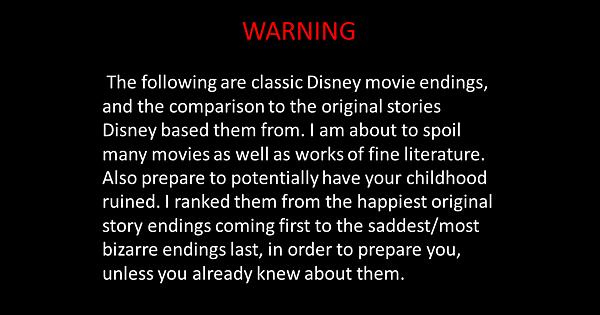 You will read this throughout the whole list. But this movie has the typical happy ever after ending after Mowgli drives out Shere Khan and finds someone his age in the human village.

The story is much the same but Mowgli kills Shere Khan before his adoptive human family is captured by other humans. He then exacts revenge on the villagers by convincing the elephants to run them out.

Princess Aurora is awoken from her long slumber by Prince Phillip with a kiss. Maleficent is defeated and they get married.

Princess Aurora is awoken by the prince after 100 years of slumber. They then get married and have two kids together. His mother who is a part ogre demands to be served with cooked meat of Princess Aurora and her kids.

When the Prince learns this, his mother leaps into a fiery pit to be burned alive.

Tarzan meets humans for the first time after his parents are killed and he is adopted by the gorillas. He falls in love with Jane and they thwart Clayton’s plan of killing the Gorillas.

Tarzan’s father is actually killed by Kerchak and he also tries to kill Tarzan when Tarzan grows up but dies himself instead. Tarzan learns that he is a high ranking cousin of Clayton but refuses to tell Jane so she marries Clayton instead.

Pinocchio is an animated puppet who has to prove his worth to be a real boy. He does this by sacrificing himself to save his Father Geppetto thus proving his worth.

He is then re-animated as a real boy.

The adventures of Pinocchio (Carlo Collodi)

While he does turn into a real boy in the end. This story goes much different. As, he kills Jiminy Cricket right away. He also doesn’t sacrifice himself immediately to save his father.

He is actually swallowed by the terrible shark and that is how Geppetto is saved. Hurrah?

Ariel makes a pact with Ursula to exchange her voice for legs. She does manage to make the Prince fall in love with her and they get married after defeating Ursula.

Ariel’s father also gives Ariel her legs back after the spell wears off.

Ariel does make the same pact but the consequences are much worse. She doesn’t manage to make the prince fall in love with her. So instead she is turned into a puddle of sea foam.

Hercules traps Hades in the Underworld and saves Megara’s soul. He is thus given the title of god but rejects it so he can be his love Megara.

Hera the wife of his father hates Hercules so she drives him insane to the point that he kills his wife and his children. Overcome by grief he goes through 12 trials to redeem himself.

#7 The Hunchback of Notre Dame (Disney)

Quasimodo saves Esmeralda from being executed after Frollo is killed. Esmeralda marries Captain of the Guard Phoebus and Quasimodo is finally accepted as a part of the society.

Essentially everyone dies. Frollo is killed by Quasimodo. Esmeralda is executed and Quasimodo starves himself to death while laying next to the corpse of Esmeralda.

Two friends, a fox named Tod and a hound named Copper are being hunted. Tod saves both the hunter and Copper from a bear attack but the hunter still tries to shoot Tod.

Copper tries to protect Tod and stands between him and the hunter. The hunter eventually backs down and they live happily ever after.

The Fox and the Hound (Daniel P. Mannix’s)

Copper is actually the Hunters dog. And Tod is being hunted because he accidentally caused the death of the Hunters favorite dog.  Copper hunts Tod for quite a long time until Tod eventually dies from old age.

The hunter then sadly shoots Copper using his shotgun.

Which one of these stories surprised you the most? I recommend you reading the original stories. Yes, I know I spoiled them but there is so much more in these terrifying original tales.