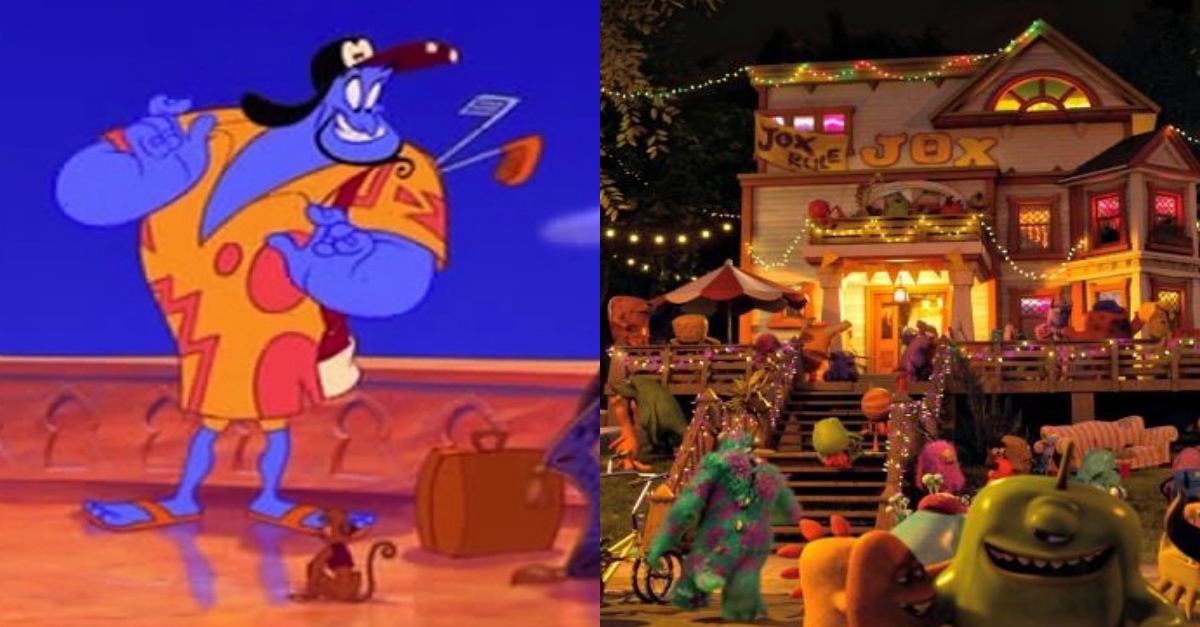 Since the beginning of the Disney era,  Disney has made a habit of including cameos of other characters in their movies. Some are easy to spot, others not so much. Either way, next time you grab your popcorn and settle in for a movie marathon, keep your eyes peeled.

Rapunzel and Flynn from Tangled made an appearance in Arendelle for  Elsa’s coronation in the movie Frozen.  Can you spot the couple?

Jock, Peg, and Trusty (Lady and the Tramp), made an appearance in the 1988 Disney film, Oliver & Company.

While this is one of the lesser known Disney films, Ratigan from Oliver & Company does make a cameo in one of the picture frames.  Can you spot Ratigan? (Hint: check out the top left silver picture frame)

The King and the Grand Duke from Cinderella make an appearance during the wedding scene of The Little Mermaid.

While this one is fairly obvious, Mrs. Potts and her son Chip show up on a table in the camp scene of Tarzan.

7. The Princess and the Frog

In the beginning scenes of The Princess and the Frog, we can see a woman on her terrace shaking out a rug, that happens to be very similar to the magic carpet in the 1992 film Aladdin.

This Disney film is yet another that has several Easter eggs featuring our favorite characters.  While the first one featuring the Genie dressed as Goofy is rather obvious, the second one may have slipped by. The second is the beast  ( Beauty and the Beast) as one of the Sultans figurines.

9. The Hunchback of Notre Dame

This Disney classic, is chalk full of cameos from our favorite characters. The most notable being from French native Belle of the movie (Beauty and the Beast). As The Hunchback of Notre Dame takes place in France, it is no surprise to see the book lover here.  Later in the movie cameos are also made by the Magic Carpet (Aladdin), and Pumbaa (The Lion King).

In the Disney film, The Rescuers, we see a beautiful reunion by Bambi and his mother.

11. Almost Every Pixar Movie Ever

While this isn’t just one film, Pixar is also notorious for including cameos in almost every single film. The most prominent of those, being the Pixar Luxo Ball. The Luxo Ball (featured in Pixar’s first short film) is considered an unofficial logo for Pixar.  While it appears in almost every Pixar movie, some of the most prominent appearances are in Toy Story and the Incredibles.

The Pizza Planet Truck has made appearances in every Pixar film (with the exception of the Incredibles). Here are just a few of the many cameos.  The iconic Toyota has weathered the end of the world in the movie Wall-E and is being inspected by Eve as seen above. Appearing in the first and now the second Monsters Inc., we see the iconic Pizza Planet truck again. This time, delivering pizza to a hungry monster filled fraternity.

This list highlights just few of the many cameos in both Disney and Pixar films alike. As new films hit theaters we are sure to see more appearances  by our favorite characters. Which of your favorite movies and cameos didn’t make the list? Let us know in the comments!