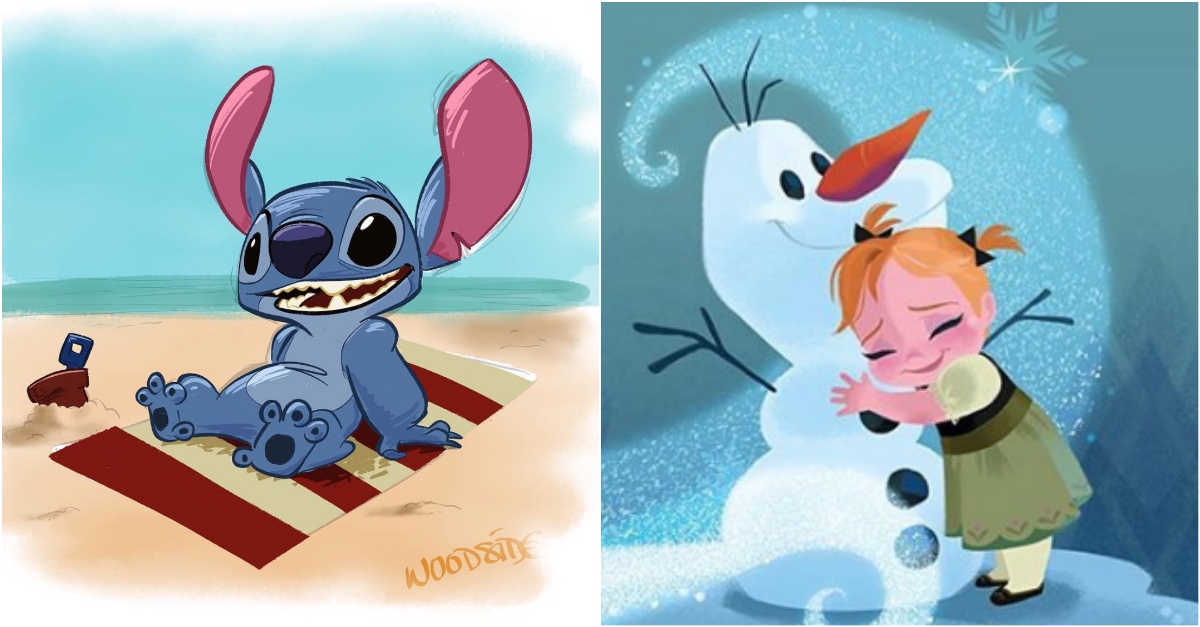 Everybody uses Instagram, of course, and probably all Disney fans are following Disney’s official account to get new updates and check out the behind the scenes content that they post. However, Disney employees are known for sharing their impressive work with their followers on Instagram.

We are going to start from Brittney Lee, who happens to be a visual development artist and you are definitely going to love her work! Brittney has been working with Walt Disney Animation Studios since 2010. She has designed many costumes for the characters of Frozen. Not just that, she even designed the interior of the Ice Palace, and Elsa’s hair was redesigned by her too.  She loves the original characters that she built herself for Disney. She’s married to a guy who happens to be very hot and guess what? He works at Disney too and can be noticed in her pictures occasionally.

That’s Bill Schwab, who has been supervising the designs of the characters of Wreck-it Ralph & Frozen. He even designed the characters of one the most hit movies Disney has produced; Tangled and The Princess and the Frog. He worked as an art director for the characters of Moana too. Isn’t that awesome!? Moreover, if you follow him on Instagram, you will see that his feed is full of amazing art concepts that depict how the likes of Louis The Alligator, Sven the reindeer and Wreck-it Ralph changed and increased, as time passed by. He even made an Easter Egg which looked like Olaf the snowman.

Coming towards Jason Deamer, who is well known as an art director and a character designer at Pixar. He contributed to various Disney movies, and some of them are Monsters University, Finding Dory, WALL-E & Ratatouille. He likes to post amazing designs which are in the process for now. Even his young son is an artist! Jason often shares his son’s paintings on his Instagram and you’ll love it.

Griz and Norm are an adorable married couple who work for Walt Disney Animation Studios. Norm is a storyboard artist and Griz is a visual development artist and a character designer, how cool is that!? Norm has contributed his skills and worked on various Disney movies such as Zootopia, Moana, Frozen & Big Hero 6. However, Griz has worked on various Dreamworks movies like Penguins of Madagascar and Home. Her amazing skills include Moana too. You can check out their Instagram’s feed for Disney movie scenes, drawings, etc. And guess what? You will find a lot of cats on their Instagram too! A lot of cats!

Michael Woodside is an animator who has been well known for his amazing skills in movies like Moana, Big Hero 6 & Zootopia. During Fridays, Michael would often dedicate something to one of his Instagram followers. Last but not the least, he’s pretty famous for his corgi doodles!

Lisa Keene, she is a Disney vet. However, she has been working with Disney as a background supervisor and visual development artist because she’s pretty multi-talented. She has worked on classics like The Lion King, The Hunchback of Notre Dame and Beauty and the Beast. If you want to see her amazing paintings of classic characters of Disney or the scenic designs that she made for the movies like Moana, Tangled, and Frozen, you have got to follow her on Instagram. Oh, and she has a lot of videos of her goat on her Instagram profile.

Lorelay Bové is a visual development artist who has shown her spectacular talent in Disney movies which include Winnie the Pooh, Zootopia, Princess & the Frog and several more. Although if you are planning to follow her on Instagram, you should know that you will find iconic characters like Khaleesi, Princess Leia & of course Wonder Woman shared on her Instagram. Because she doesn’t really post much behind the scenes content with her followers.