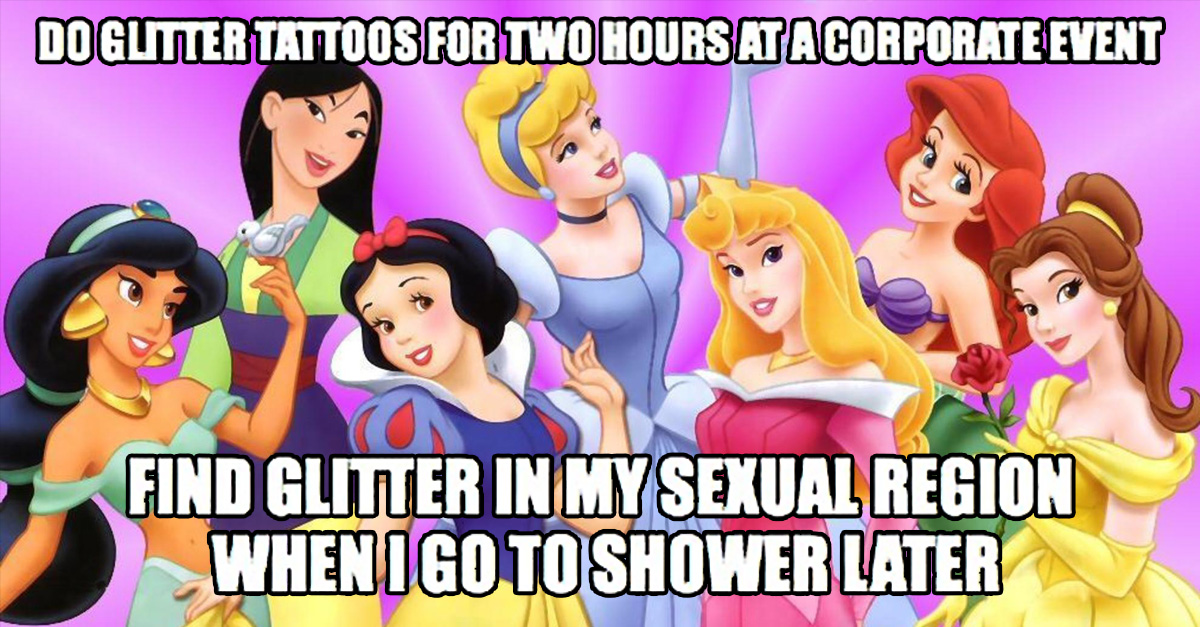 Disney Princesses are not perfect.

Well, okay that is not entirely true. Since technically they are just cartoon characters. But what is true is that humans aren’t perfect. And when you put a human in Princess costume, you get weird stories.

You see following are some of the stories confessed by a Disney Princess and turns out kids can be quite annoying sometimes. I know surprising right!? (That was sarcasm if you couldn’t tell.)

Let’s start shall we?

My very first time on the job was in dead July heat, in a massive hulk costume. We spent the whole party outside, and by the time the 1 hour party was over and I was picked up, I was literally BATHED in sweat, woozy, and had a massive headache.

Got home and re-hydrated, but man was that bad.

This was incredibly creepy. Apparently he wanted to know if I was voting age so he could convince me to vote for their party. I gleefully said “A princess never reveals her age!”, and then promptly got the fuck out of there.

This one genuinely got a chuckle out of me. You can never beat dads for their jokes, that’s for sure.

I had actually checked the weather forecast before I went to the party, but when I first got there it hadn’t snowed yet. Mother nature was on my side and the kids loved it.

Pretty sure one of the grandparents thought I was a witch or something, because she crossed herself as soon as it happened.

This one was a little peculiar, as apparently the kids line of logic was “I’ve never seen a princess brush her teeth or use the potty, so I shouldn’t either.” So during our “How to be a princess” section of the party, we mentioned tooth brushing and potty methods.

This party was the worst one I had been to in my whole career. I was playing Olaf at a community center, while a coworker played Elsa.

The kids were so unruly that they separated us, so one group was following Elsa and begging her to sing ‘Let it Go’ and what not, while my corner became a version of Walt Disney Smackdown.

Kids were punching me, kicking me, and trying to get into my costume. The parents did nothing and basically watched them turn me into a plush, adorable punching bag.

Eventually, I got pissed off, and I whirled around and smacked one of them in the face. I then waved my hands around, like I hadn’t seen them there, and everyone laughed it off. Little shit deserved it.

This made me pretty confused and upset. I don’t judge anyone who smokes weed- it’s your body, do with it what you will. But what I do judge is people who smoke, weed or cigarettes or otherwise, in the presence of children.

I rolled up to bring in craft stuff for the kids and saw two parents sharing a joint in the backyard, with another smoking a pipe. I went about the party but I was pretty pissed inside.

As a Princess, you tended to get a lot of freebies, and have a lot of fun. This day was awesome, as I essentially got to be a kid again, except dressed up as a pretty princess.

The best part was the free food. I’m a whore for that kind of stuff.

If you want someone who cooks, hit up that basic bitch Snow White, though she’s used to seven men so don’t be surprised if you don’t make her happy.

This was probably the shittiest part of my job. I was super nervous during the party but she was such a sweet kid that I just wanted to do my best for her.

We hosted a charity event for her not to long after her passing. I still feel awful about it.

GLITTER GETS FUCKING EVERYWHERE PEOPLE. IT IS THE HERPES OF THE CRAFT WORLD. IT IS LIKE SAND. FABULOUS, MANIACAL SAND.

This is a moment I’m especially proud of. I’m a track and field runner so I’m competitive. That bitch ass motherfucker didn’t even see it coming, I just hitched up my ball gown and sprinted down the track. I got a lot of cheers. Suck it!

In all honesty, with all the shit I had to put up with, making the kids happy really made me happy.

When the kids are hugging you goodbye, telling you they love you, and the parents are thanking you for making their kid’s day, you get a really nice fuzzy feeling and a good sense of pride in what you’ve done.

You’ve made a difference, and that’s what really counts.