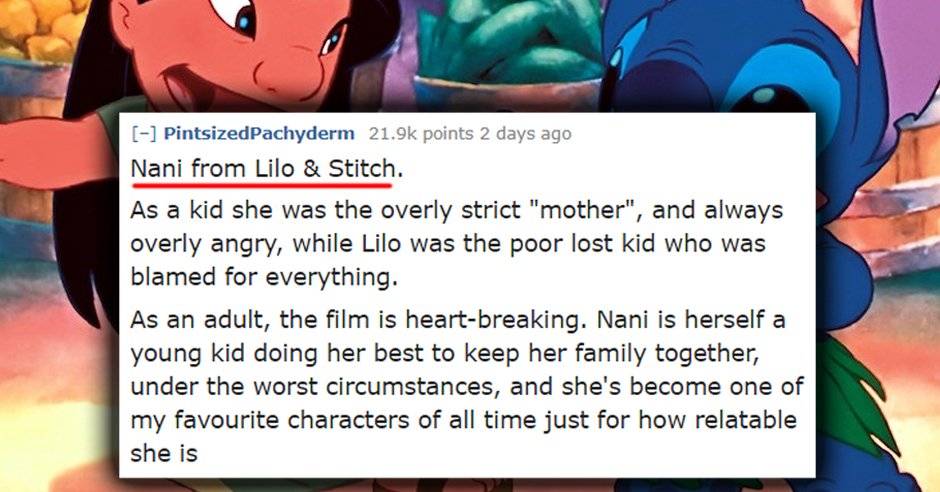 The people we thought were evil? Yeah, not so much.

I remember watching Ariel, The little mermaid and absolutely hating King Triton for stopping his daughter for doing what she desired and stomping on her dreams, but I watched it a few years back…

And I have to say that I was utterly wrong. Sorry to say, but Ariel was pretty dumb, and King Triton was only trying to save her from the horrors of the world over the sea. To prove my point, she lost her voice and went through the whole ordeal just because she didn’t listen to her father.

I am not the only one either, many people have watched the same movies as adults and sympethised with the characters they used to hate so scroll on below and take a look.

Adult: How the FUCK is this guy in a Disney movie?

As a kid they were just the goofballs appearing constantly for slapstick humor and episode drama.

Rewatching the series as an adult they are actually a lot more endearing pair than any of the main cast and get a fair amount of development and depth throughout the series. And that’s not including the puns and jokes that slipped by me in my childhood.

Mr. Wilson from Dennis the Menace. That kid really is a destructive force of nature, and his parents don’t do shit to stop it.

Kid Me thought it was unfair that his wife would leave him and take the kids when he was such a hilarious, fun guy.

Adult Me thinks “Yeah, there are multiple good reasons why she divorced you, Daniel.”

Donald Duck. As a child I thought he is lazy af and just boring. The older I get, the more I can identify with him.

Not sure if this has already been mentioned but Helga Pataki from Hey Arnold. As a kid, I thought she was an ugly weird girl. As an adult, my mind was blown when I realized how neglected she was.

Her mom was an alcoholic and her dad was a narcissist who favored Olga and made her the golden child. Most of the characters have pretty sad stories honestly. That show was deep and I never realized it as a child

Hank Hill. Growing up I thought Hank was just kind of an ass to his kid for no reason. Now I realize that he’s got a whole host of emotional issues caused by his upbringing, even if he doesn’t do much to address them. He’s really doing the best he can and usually comes around in the end.

Every parent in every Disney movie. They’re just trying to get through life and they have to deal with 15 year old magical princesses and shit.

King Triton. As a kid, you look at him as the powerful and oppressive father who is preventing Ariel from getting what she wants. As an adult, you realize more and more how stupid Ariel is and how much he is trying to actually protect her.

As a kid she was the overly strict “mother”, and always overly angry, while Lilo was the poor lost kid who was blamed for everything.

As an adult, the film is heart-breaking. Nani is herself a young kid doing her best to keep her family together, under the worst circumstances, and she’s become one of my favourite characters of all time just for how relatable she is

I used to read Calvin and Hobbes through Calvin. Now I see it through the parents.

Red from That 70’s show. I used to think he was a total jerk. Now I realize Eric was a dumbass. I feel old.

I used to think Bart Simpson was cool. Now I’m sure he’s heading straight into a lifetime of incarceration.

Have any characters that you relate with now even though you hated them as a child? Comment down below and let us know.