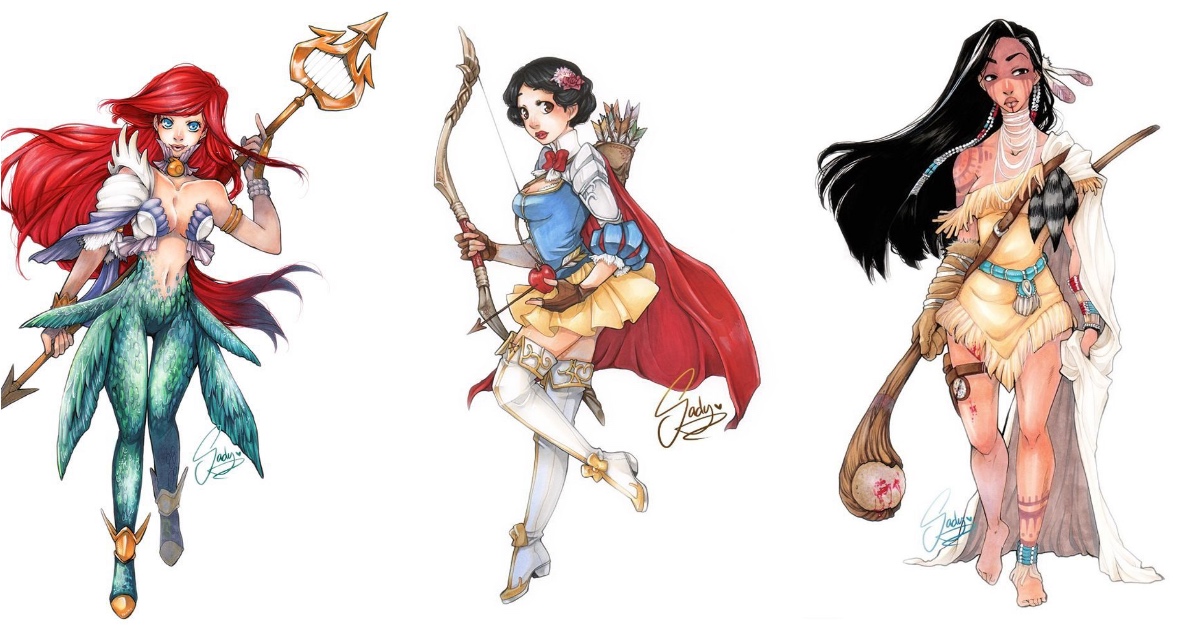 People sure do love to give Disney characters a makeover.

I don’t blame them either. I would do the same (If i could draw to save my life). Each and every new re-imagination is beautiful and unique in its own way. This is definitely true for the following one. 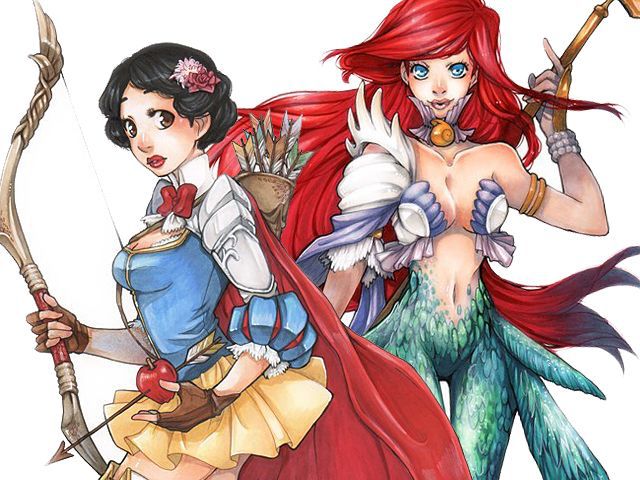 You see, Finnish artist Sadyna has started a new project by the name of ‘Disney Warrior Princess Project’. I am sure, you already know what the project is all about. She even gave most of the Princesses their personal unique back stories. 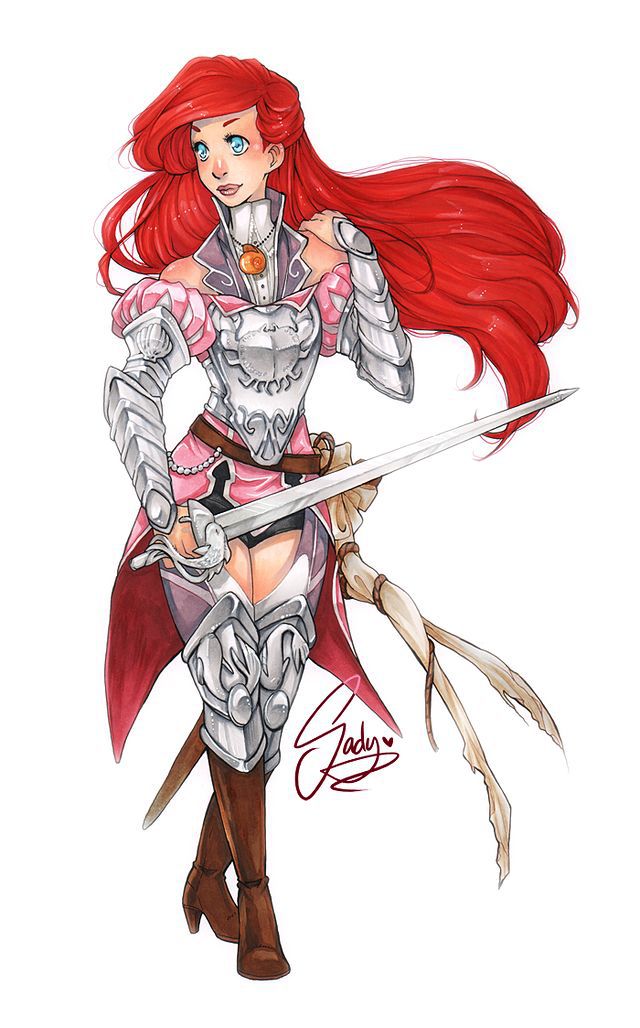 Ariel cannot speak; her voice and true strength lies within a mystical seashell. In times of great need, Ariel uses the mystical seashell to unleash her fury and becomes… The Voice Of The Queen.

Ariel – The Voice Of The Queen. 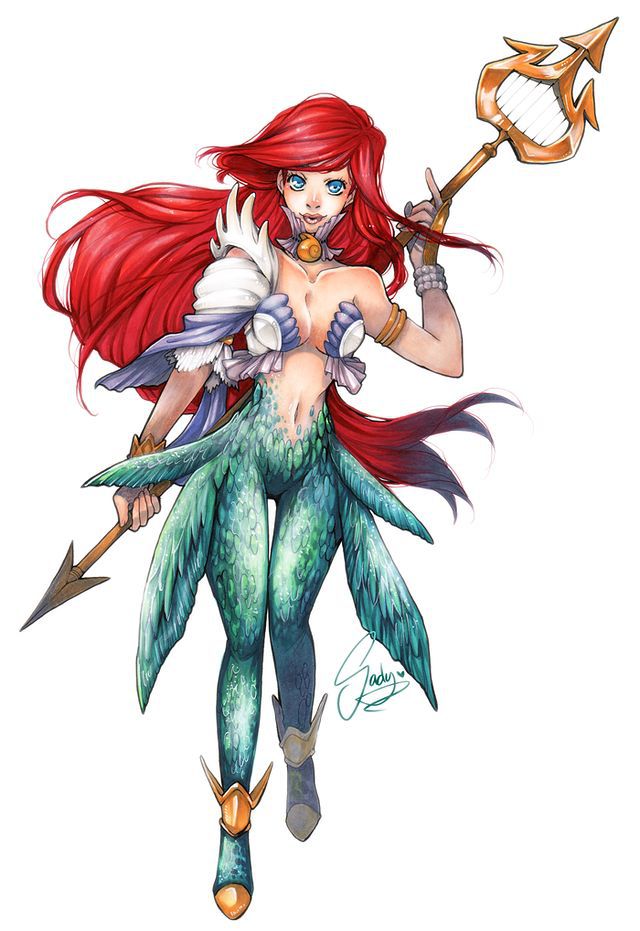 Upon using the mystical seashell to grant herself great strength, Ariel becomes a powerful Sea Mage that commands truth, virtue, and justice! 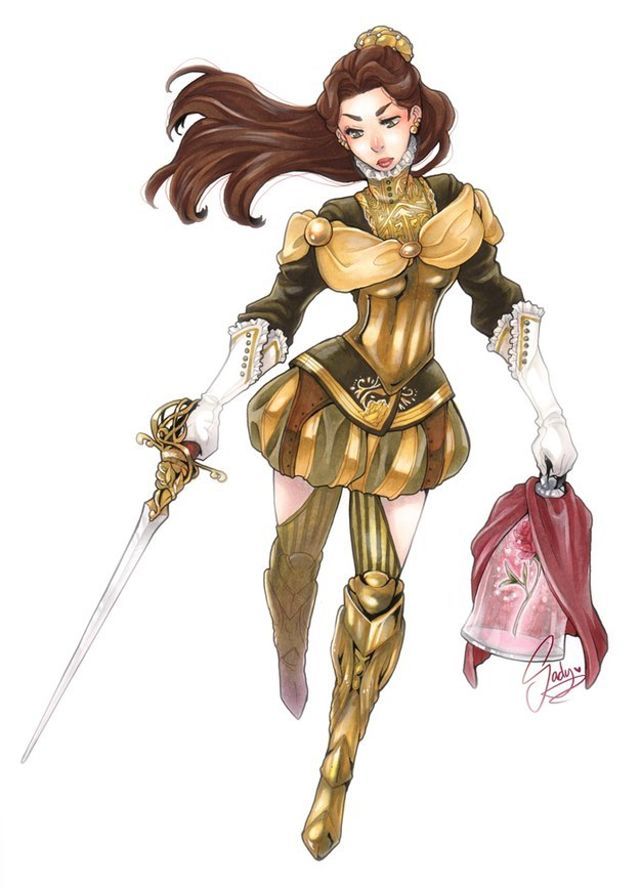 Belle is the King’s Royal Protector. She is the only one who knows that his majesty is under a Beastly Curse, and as such, has been given the title of “The Secret Keeper”.

One of the King’s Guard, a man named Gaston, becomes jealous that a woman is the King’s Royal Protector and wants to take her place. The King refuses. One night, Gaston stalks Belle and finds out that the King is the accursed Beast and plans to murder him.

Gaston attempts to strike down the King, but Belle crosses his sword. An epic duel ensues! A man fighting for power, and a woman fighting to defend her love. What will happen next?! 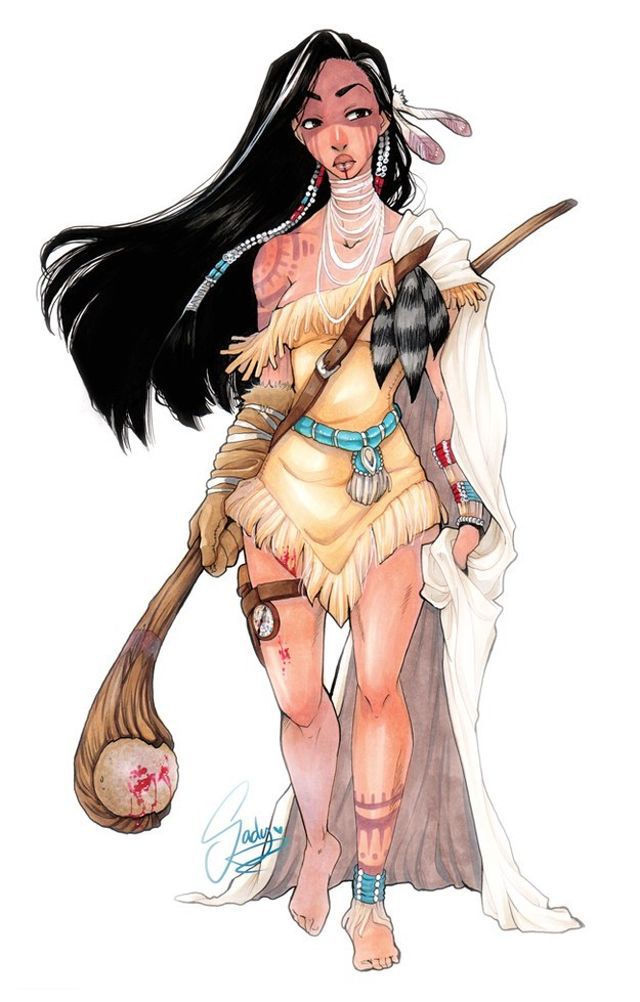 Pocahontas was a pain to draw and color too, and her design isn’t so different from the original costume but I just wanted to make her more…ruthless?

I suppose she is some kinda of executioner-warrior. Also I didn’t want to give her armor or a sword or anything like that; I wanted to keep her ”wild”. 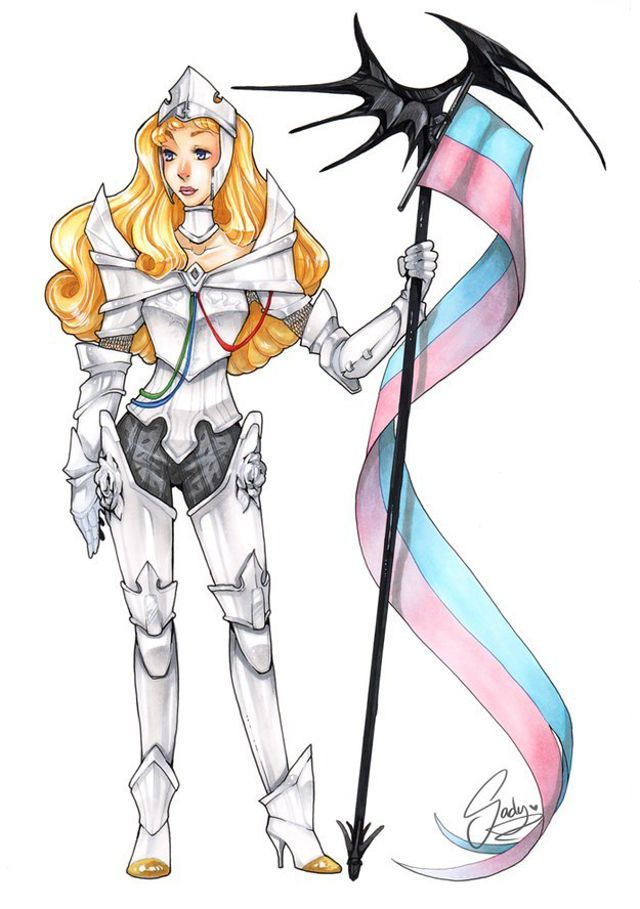 Aurora’s flag colors were taken from both her dresses, and the three different colored strings embellishing her armor were each given to her by her three Godmothers. 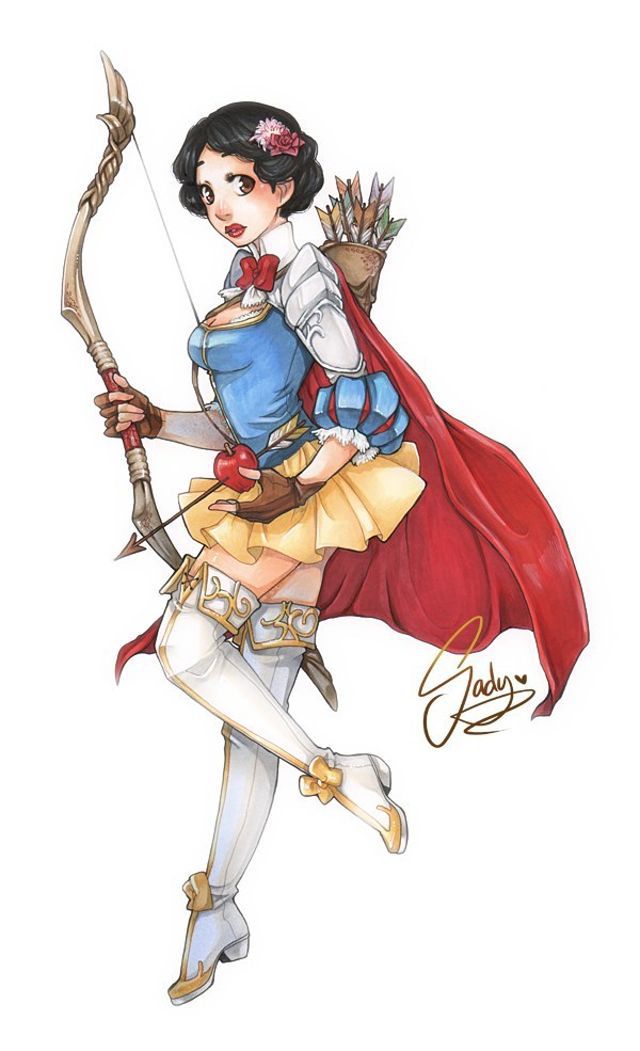 Someone make a movie where Snow White actually does something badass. No, Huntsman doesn’t count at all. 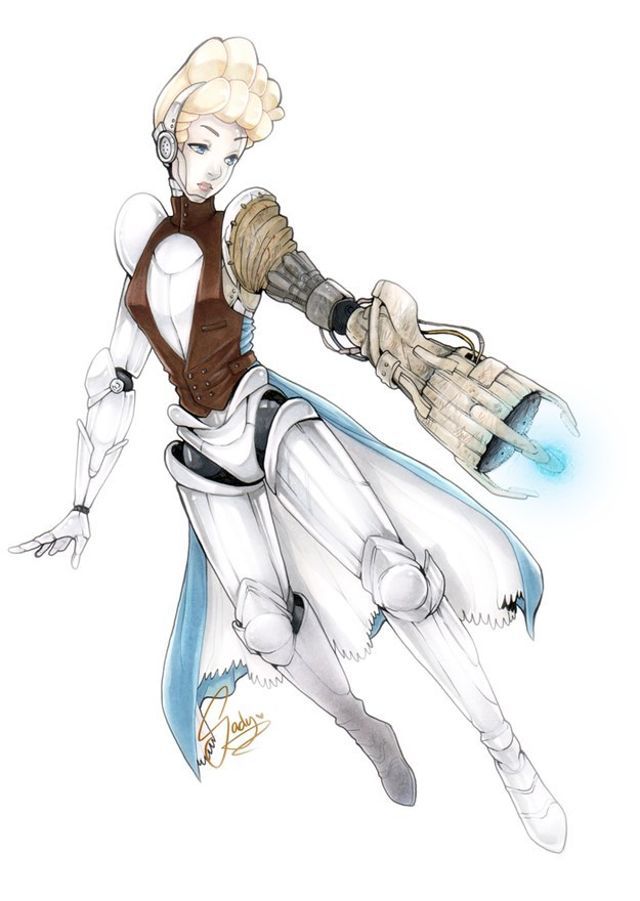 So Cinderella has quite a long and unique back story. Don’t worry it explains why she has that arm.

Cinderella’s creator was a brilliant scientist. For years, he tried to make an android that has feelings and can imitate human life. He finally succeeded with his last android, Cinderella. He treats Cinderella like his own daughter, gives her clothes to wear, and teaches her new things everyday.

One day the scientist dies and his wife (Evil Stepmother) becomes her new owner. The Evil Stepmother treats her terribly, and her real daughters shred and tear all of Cinderella’s clothes because they think servants should not be able to wear clothes like humans.

Cinderella accepts her place as an android-servant as any other android in their world would… Until she meets her Fairy Godmother who grants her one wish. Cinderella wishes to be human but Fairy Godmother can only make her a human for 24 hours. Cinderella reluctantly agrees.

She becomes a human, and manages to escape out for a day. She meets people in town and they accept her as a normal person! She couldn’t be more happier.

Cinderella ends up at a big big party in the Royal Palace where she meets a very nice man and she dances with him and they talk etc. Cinderella forgets the time and suddenly in the middle of the party she transforms back into an android again.

People around her start to panic. Guards push Cinderella back and try to hold her down, warning her to stay away from The Prince (surprise!) because they think all androids are a threat and because they are also not allowed to in the Palace. Cinderella breaks free from the Guards, but they managed to tear off her left arm. Cinderella escapes and hides in the shadows.

In order to protect herself from being hunted by The Kingdom’s Royal Guards, Cinderella retrofits the arm cannon of a discarded combat android onto her body from a junkyard. Where will she go now?

You can check out more of Sadyna’s work on Deviant Art, or you can follow her on Tumblr.