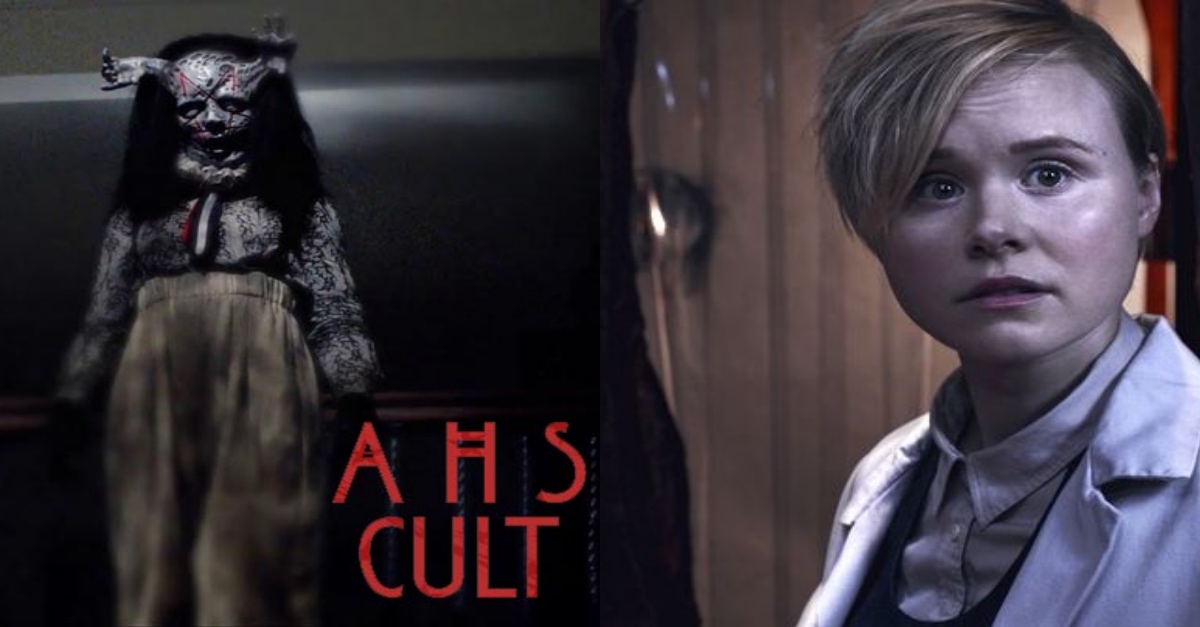 Continuing with the madness of last weeks episode, Episode 2 of American Horror Story Cult entitled “Don’t be afraid of the dark” definitely left us with more than just a renowned fear of the dark.  With the introduction of even more characters, the return of Twisty, and a potential murder, it’s safe to say that this week’s episode left us with more than a few questions. Here’s everything we know from this weeks episode.

1. Someone is playing with Ally’s phobias

We open to exactly where we left off with Ally screaming that there’s a clown in her bedroom. Ivy grabs a knife and heads upstairs to defend her family, only to see that once again, there’s no clown. In a state of hysteria, Ally admits she “doesn’t know whats real anymore”.  As expected, Ivy states that she “doesn’t know how much more of this she can take”. Will Ivy eventually have enough of Ally and leave for good? Or is Ivy the one behind all of these clown filled mind games? Theories are yet to be determined, however one thing is clear. Someone is playing with Ally’s phobias. The question is, who and why?

While this was technically, only in Oz’s night terrors, it seemed that Twisty was indeed alive and in cohorts with the other neighborhood clowns. As the season progresses, we’re sure to see much more of Twisty.

3. Harrison and Meadow Wilton Move In Next Door

Harrison (Billy Eichner) and Meadow (Leslie Grossman) hastily move into the house across the street from Ally and Ivy. Coincidentally this house just happens to be the place where Councilman Chang’s brutal murder by clowns, took place in Episode 1. Harrison is gay and Meadow is his best friend, they both promised to marry each other if they were still single at 35. They also keep bee’s for a living which already proves to be bad news for Ally’s trypophobia.

They are also already entangled in Kai’s drama, as they were the ones who filmed the migrant workers beating up Kai. While we saw that Kai actually enticed the workers to beat him up (by throwing a urine filled balloon at them), this part was conveniently not caught on camera. Its plain to see that Harrison and Meadow are somehow part of Kai’s sadistic plan.

After the death of Councilman Chang, there’s a city council seat up for grabs. This comes conveniently at a time when Kai is gaining public recognition after the “attack” on him by the migrant workers. This makes things pretty clear. Some way some how, Kai had a hand in Chang’s murder.

After an altercation between the chefs, some call for Pedro to be fired. To which Ally responds “I’m not about to fire an immigrant in this climate.” Later that night the alarm is tripped at the couples restaurant and Ally goes to investigate. After arriving she happens upon the dead body of Roger (the chef who threatened Pedro earlier) hanging from the ceiling in the meat locker.

The police question Pedro and inquire about his immigration status, even implying that he is responsible for the murder. Pedro tells Ivy, “It’s scary to be brown these days.” The horror of AHS: Cult is far to real as the show is replicating racial tensions in America right now with scary accuracy.

Later in the episode, he asks winter how to tell if the clowns he’s seeing are real, since last week Winter told everyone that he’s imagining them. She tells him to “Just ask.” So later that night when Ozzy sees a clown, he asks, “Am I asleep, or are you real?” to which the clown replies “You’re asleep”. After hearing this reply, Ozzy goes back to sleep. Winter is teaching Ozzy to accept the horrors in his life as if they are normal, this proves to be yet another nod to America’s political climate.

Dr. Vincent pays a visit to Abby’s home after she misses several appointments.  (The spontaneous visit could also be due in part, to Ivy inviting him.) Ally tells him, “My phobias were a perfect reaction to what I instinctively knew was true…The world is fucked up. And the election made it worse.” Ally has made several attempts to seal herself off from her phobias, even going as far as to physically seal up the house by barring the doors and windows. After the encounter, Dr. Vincent tells Ivy, “I do worry that she’s exhibiting early signs of agoraphobia.”

As one can imagine, this obviously didn’t go well. Kai attempts to smooth talk his way to Ally’s vote, however once he realizes this won’t word, things begin to take a dark turn. Kai uses the standard horror movie requests to gain entry into her house , “It’s so hot out here, can I please come in for a glass of water?” “Can I use your phone?” “My car broke down, pretty please?” “Can I use your restroom?” “Can’t you see I’m an injured man?”. She doesn’t buy in to them, however this is a clear reminder that Kai is a true master of horror tactics.

Trying to help her relax, Winter runs Ally a bath and then entices her to let her give her a “massage”. Winter reassures her, “Don’t worry, I won’t tell your wife.” However before they can go any further, the house alarm goes off and the lights go out.

Whether its giving her a gun, or convincing her that the street blackout was due to terrorism, it’s plain to see that Harrison and Meadow’s true purpose is to terrify Ally and increase her hysteria. In any case, it’s definitely working.

The ice cream truck driven by the clowns who killed the Changs returns once again. Ally assumes that they’re going to kill her, especially after discovering the alarm system in her house has been tampered with. A clown appears, further adding to Ally’s terror. As Ally and Oz are trying to escape, a figure appears at their door.  Expecting a clown, Ally shoots at the figure with the gun Harrison had given her. Sadly, the mystery shadow was no clown at all, but was actually Pedro bringing supplies for the power outage.

With so much packed into one hour, we still have so many questions for next weeks episode. Will Pedro make it? What are Ally’s other fears? What are Ivy’s true intentions? Tune in next week to hopefully get some answers, and experience more creepy clown fun with the cult. American Horror Story:Cult airs on FX 10/9c.