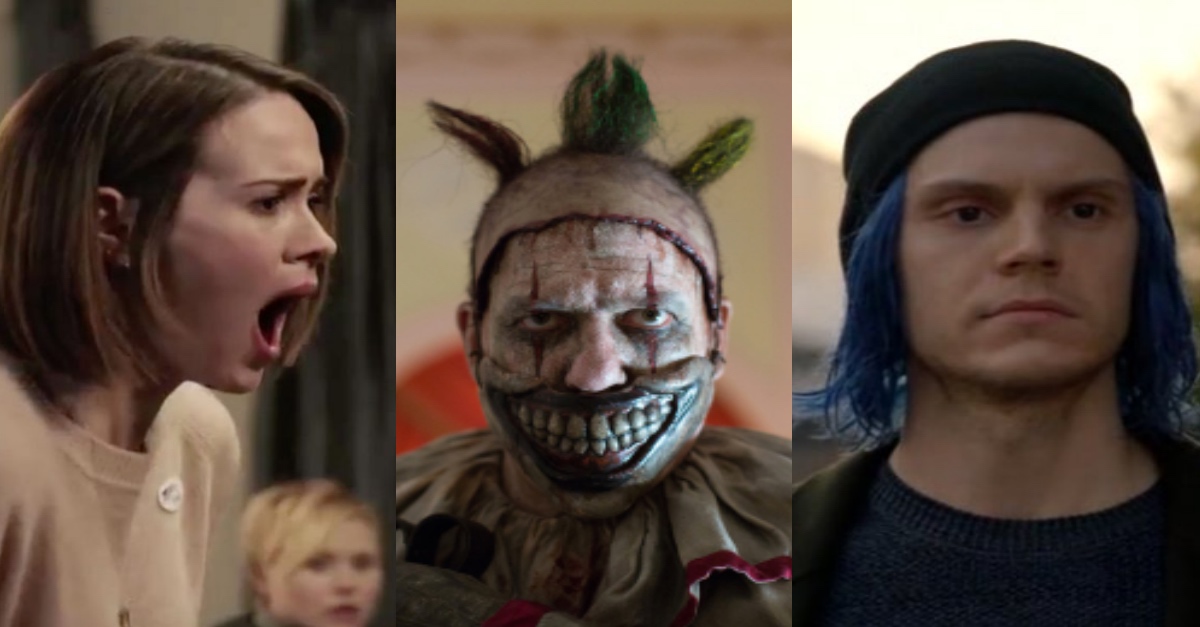 The premiere has finally arrived and we’re absolutely thrilled! The first episode of AHS season 7 titled “Election Night” left no stone overturned when it came to setting the stage for yet another wonderfully horrifying season.  Following the aftermath of the United States 2016 Presidential election, we see our first glimpse at this seasons big ticket characters.

Played by AHS veteran Sarah Paulson, Ally is set to be one of the main characters of this season. Ally is a wife and mother to her son Oz, living in Michigan at the time of the election. We later learn throughout the episode that she has a serious phobia when it comes to creepy clowns.  Between seeing her therapist Dr. Rudy Vincent (Cheyenne Jackson) and managing her butcher shop with her wife Ivy (Alison Pill) dealing with her fears becomes increasingly difficult.  After multiple clown induced hallucinations, her mental state proves to be causing problems at home as well.

Featuring the return of another AHS favorite Evan Peters, Kai has proven himself to be a force to be reckoned with. After a somewhat joyous but violent reaction to the election,  we begin to see the emergence of a true psychopath in Kai. After the election,  Kai crashes a local government meeting and gives a speech about a somewhat cryptic political agenda. Later in the episode, he openly provokes a group of Latino men into beating him up.  Later in the episode we see that Kai has a strange connection to Ally’s son Oz, specifically to his babysitter Winter Anderson (Billie Lourd). While much is still to be discovered about Kai, one thing we know for sure is that Kai is a person who feeds on being feared.

Appearing to be distressed about the outcome of the election, Winter Anderson (played by Billie Lourd) turns into a somewhat sadistc character in the first episode of AHS. Winter seems to know ( or even be related to) Kai, and agrees to follow his agenda to get to Ally, by becoming Oz’s babysitter.  While watching Oz, Winter encourages him to fuel his curiosity about about the dead. She lures him into watching online videos of murder, and even witnessing one himself (RIP Neighbors across the street). When a creepy ice cream truck filled with even creepier masked people stops at a house across the street, Winter encourages Oz to investigate. After witnessing the murder of his neighbors, Oz’s attempts to tell the police are thwarted by Winter. Convinced that he must be dreaming, Oz’s parents don’t give it a second thought.  While we don’t know much of Winter’s intentions yet, we do know that we’ll be seeing a lot more of her as Kai’s plans progress.

Twisty the Clown is Back

An AHS: Freak Show favorite, Twisty the Clown (Played by John Lynch) is back again for more murderous fun. While his foul intentions are still unclear, fans are sure to see more of Twisty later this season.

With so much going on in the Pilot, we still have many questions that will have to wait another week to be answered. Is Kai secretly Oz’s dad? Will Ivy have enough of Ally’s clown phobia? And seriously, what’s up with Twisty? Be sure to watch next week, Tuesday 10/9c on FX for even more cult fun. Stay tuned for more AHS updates and recaps, for what’s shaping up to be one of the best seasons yet.